Thoeny is a ghost town in the northern part of Valley County, Montana, near the Canadian province of Saskatchewan. Thoeny is located north of Hinsdale and west of Opheim. The school house still stands. There is also a cemetery located on the hill.

Thoeny was named for its first postmaster, Jacob Thoeny, in 1915. By 1918, the community had two general stores, a newspaper, a blacksmith shop, and several other businesses, all without the benefit of being located near a railroad. A schoolhouse, a cemetery and a few foundations are reminders of the community. Thoeny is located near the Canadian province of Saskatchewan, north of Hinsdale and west of Opheim. 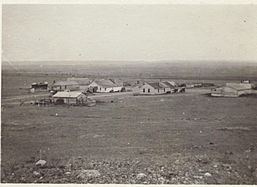 The census district named Barnard was seceded from Thoeny and had a population of 76 in 1930. Thoeny became part of the Hinsdale Rural CCD in the 1940 Census, along with Barnard and Nott.

All content from Kiddle encyclopedia articles (including the article images and facts) can be freely used under Attribution-ShareAlike license, unless stated otherwise. Cite this article:
Thoeny, Montana Facts for Kids. Kiddle Encyclopedia.