Kids Encyclopedia Facts
This page is about a lake in Victoria, British Columbia. For the lake in Australia, see Lake Thetis. 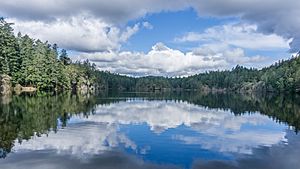 Thetis Lake is a name that refers to two freshwater lakes (Upper and Lower Thetis) connected by a narrow culvert in the 834-hectare (2,060-acre) Thetis Lake Regional Park outside Victoria, British Columbia, about 12 km (7.5 mi) from the city centre. It was established as Canada's first nature sanctuary in 1958. The park was named for the frigate HMS Thetis, which had been assigned to Esquimalt as part of the Royal Navy's Pacific Squadron. Thetis is encountered in Greek mythology mostly as a sea nymph or known as the goddess of water, one of the fifty Nereids, daughters of the ancient sea god Nereus. The park's facilities include several beaches, miles of forest trails, parking, washrooms and a change room. The two lakes are extremely popular in the summer. The area features many Garry oak and Douglas fir trees.

All content from Kiddle encyclopedia articles (including the article images and facts) can be freely used under Attribution-ShareAlike license, unless stated otherwise. Cite this article:
Thetis Lake Facts for Kids. Kiddle Encyclopedia.