Thirunallar is specially famous for the temple dedicated to Lord Shani, or Lord Saturn. The temple is named after him, Thirunallar Saniswaran temple. The main deity of the town is Lord Dharbharanyeshwarar, a form of Lord Shiva. 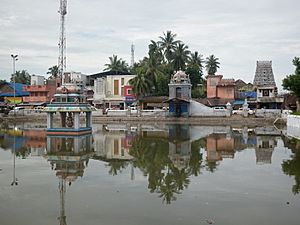 The temple of this town is the only temple dedicated to Lord Shani in the whole world. Whenever Lord Saturn passes from one zodiac sign to the other (Sani Peyarchi), millions of people comes to Thirunallar for worshiping the lord. The Nala theertham or Nalan kulam is the temple tank of this temple, which is said to be washing away all misfortunes caused by karma. That is why Lord Shani is renowned as "the dispenser of Karma".

A special fact of this town is a satellite sent by the scientists of NASA for orbiting the earth has suddenly slowed down when it crossed the Thirunallar Saniswaran temple.

Thirunallar is believed to be named for King Nala, the king of the country of Nishadha.

All content from Kiddle encyclopedia articles (including the article images and facts) can be freely used under Attribution-ShareAlike license, unless stated otherwise. Cite this article:
Thirunallar Facts for Kids. Kiddle Encyclopedia.