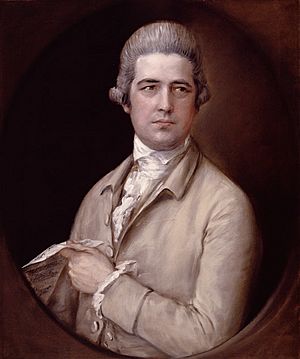 Thomas Linley (born Badminton, Gloucestershire, England, 17 January 1733; died London 19 November 1795), was an English composer, harpsichordist and singing teacher. He studied with Thomas Chilcot, organist of Bath Abbey, and later with William Boyce and possibly also with Paradies, the Italian harpsichordist who had come to live in England.

He soon became well known as a singing teacher and composed a lot of music for the Drury Lane theatre, London.

He married a girl called Mary Johnson and the couple had twelve children. Several of them were gifted musicians, especially Thomas who died at the age of 22 in a boating accident.

Thomas Linley was chosen to be a member of the Royal Society of Musicians in 1777. He is buried in Wells Cathedral.

All content from Kiddle encyclopedia articles (including the article images and facts) can be freely used under Attribution-ShareAlike license, unless stated otherwise. Cite this article:
Thomas Linley the elder Facts for Kids. Kiddle Encyclopedia.