Three-spired cathedrals in the United Kingdom facts for kids

There are only three cathedrals in the United Kingdom with three spires. Lichfield Cathedral, dating from the 13th and early 14th centuries is the only medieval cathedral. Between the 14th and 16th centuries Lincoln Cathedral also had three spires and was the tallest building in the world for 238 years until the central spire collapsed in 1549 and was not rebuilt. Both Truro Cathedral, Cornwall (late 19th–early 20th century) and St Mary's Episcopal Cathedral, Edinburgh (late 19th century) were built in the Gothic Revival style and also have three spires. 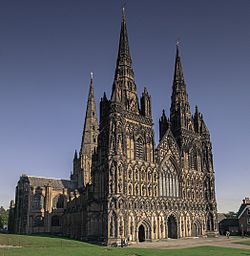 Lichfield Cathedral is situated in the cathedral city of Lichfield. The cathedral dates from various periods in 13th and early 14th centuries, although this can not be allocated to fixed years, since the archives were destroyed during the English Civil War. The internal length is 370 ft (113 m), and the breadth of the nave 68 ft (21 m).

The walls of the nave lean outwards slightly, this was caused by the weight of stone used in the ceiling vaulting, some 200-300 tons of which was removed during renovation work to prevent the walls leaning further. The windows of the Lady Chapel contain some of the finest medieval Flemish painted glass in existence. It came from the Abbey of Herckenrode (now in Belgium) in 1801 having been purchased by Brooke Boothby when that Abbey was dissolved during the Napoleonic Wars. It was then sold on to the Cathedral for the same price. It dates from the 1530s. There are also some fine windows by Betton and Evans (1819), and many fine late 19th century windows, particularly those by Charles Eamer Kempe.

There were three sieges of Lichfield during the period 1643–1646 as the Cathedral was surrounded by a ditch and defensive walls, and made a natural fortress. The Royalists were defeated in March 1643, and the Parliamentarians a month later. In 1646, the Parliamentarians were once again victorious, but the Cathedral suffered extensive damage: the central spire was demolished, the roofs ruined and all the stained glass smashed.

It is the only medieval English cathedral with three spires and has an ornate west front extensively renovated in the Victorian era by Sir George Gilbert Scott. Scott also built the three-spired St Mary's Cathedral, in Edinburgh. 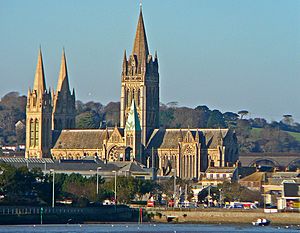 South side of the Cathedral of the Blessed Virgin Mary, Truro

Truro Cathedral is a cathedral in the city of Truro in Cornwall in south-west England.

It was built in the 19th century (from 1879) on the site of a 16th-century parish church (St Mary the Virgin) to a design by noted church architect John Loughborough Pearson, heavily influenced by Gothic ideas. It features three massive towers and spires. The central tower and spire is 250 feet (75 m) tall, the western ones reach 200 ft (60 m).

Foundation stones were laid in 1880, the first section of the cathedral was consecrated in 1887, with the building finally completed in 1910. In the meantime, Pearson had died in 1897; his work was continued by his son, Frank Loughborough Pearson. 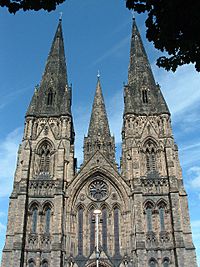 St Mary's Cathedral, Edinburgh, is a cathedral of the Scottish Episcopal Church in the city of Edinburgh, Scotland.

In 1689 after the abdication of James VII/II, the Reformed Church in Scotland divided over the issue of the Stuart Succession. Two churches came into being: the Presbyterian Church established by King William, and the Episcopal Church which remained loyal to the Stuart cause. One consequence was that St Giles Cathedral, Edinburgh as it then was, came under the Established Church's ministry, and the Episcopal Diocese was left without a cathedral. For a time the Episcopal residue of that congregation worshipped in an old woollen mill in Carrubber's Close, near the site of the present Old St Paul's Church. This was used as a pro-cathedral until the early 19th century, when this function was served by the Church of St Paul in York Pace.

The foundation stone was laid on 21 May 1874 by the Duke of Buccleuch and Queensberry, whose family had been supportive of Scottish Episcopacy over the previous hundred years. Inside the stone was placed a bottle with green mountings containing a copy of the Trust Deed, the Edinburgh Post Office Directory, Oliver and Boyd's Almanac, newspapers and coins. In preparation for the opening of the cathedral a congregation had been formed to worship in a temporary iron church erected on the site now occupied by the Song School. Beginning on 26 May 1876, it was ministered to by the Dean, James Montgomery, and two chaplains, and grew rapidly. The Nave of the cathedral was opened on 25 January 1879 and from that day, daily services have been held in the cathedral.

The twin spires at the west end were not begun until 1913 and completed in 1917. The architect for these was Charles Marriott Oldrid Scott, Sir George's grandson. The western spires are known as "Barbara" and "Mary" after Barbara and Mary Walker, spinster sisters, who provided funds for the cathedral's construction from 1873. They owned the surrounding Drumsheugh Estate and lived in Easter Coates House, which survives to the north of the cathedral. They were the granddaughters of Rev. George Walker, the Episcopal Minister of Old Meldrum Church (1734–1781). Their father, William Walker, was Attorney in Exchequer, and Bearer of the White Rod of Scotland. Their mother was Mary Drummond, daughter of George Drummond, six times Lord Provost of Edinburgh and initiator of the New Town.

All content from Kiddle encyclopedia articles (including the article images and facts) can be freely used under Attribution-ShareAlike license, unless stated otherwise. Cite this article:
Three-spired cathedrals in the United Kingdom Facts for Kids. Kiddle Encyclopedia.