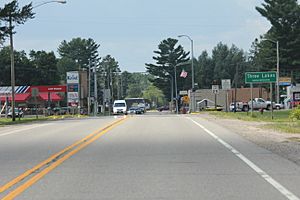 Three Lakes is an unincorporated census-designated place located in the town of Three Lakes, Oneida County, Wisconsin, United States. Three Lakes is located at the junction of U.S. Route 45 and Wisconsin Highway 32 9 miles (14 km) south-southeast of Eagle River. Three Lakes has a post office with ZIP code 54562. As of the 2010 census, its population is 605.

A post office called Three Lakes has been in operation since 1885. The community was named from its location near three lakes.

All content from Kiddle encyclopedia articles (including the article images and facts) can be freely used under Attribution-ShareAlike license, unless stated otherwise. Cite this article:
Three Lakes (CDP), Wisconsin Facts for Kids. Kiddle Encyclopedia.