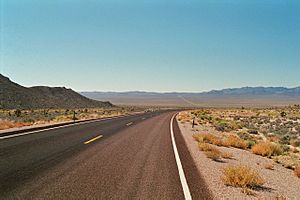 View along State Route 375 in the Tikaboo Valley, October 1997

The climate there is dry, even on cool mornings after a rainfall.

Biologist Chris Smith has studied flora and fauna in the area including Joshua trees and moths. It appears that this may be the only place where two types of Joshua tree, namely the Eastern and Western varieties have come together. Part of the reason for this is the possibility of Climate change which could account for the northward appearance of a hybridized species.

B-52H and B-1B Bombers often do low-level runs there. There have been other military tests there.

All content from Kiddle encyclopedia articles (including the article images and facts) can be freely used under Attribution-ShareAlike license, unless stated otherwise. Cite this article:
Tikaboo Valley Facts for Kids. Kiddle Encyclopedia.