The Tilden Park Merry-Go-Round is a menagerie carousel located in Tilden Regional Park near Berkeley and Oakland, in unincorporated Contra Costa County. It was built by the Herschell-Spillman Company of Tonawanda, New York in 1911, and it is one of the few antique carousels left in the United States. Before arriving at Tilden in 1948, the carousel had seen service at amusement parks in San Bernardino, Ocean Beach, and Los Angeles. It is listed on the National Register of Historic Places.

The Merry-Go-Round is owned by the East Bay Regional Park District.

While major mechanical overhauls have taken place over the years, including in 2008, much of the original machine remains intact. The machine is still operated using a trolley car throttle and a manual handbrake system. The original 7-1/2 horsepower Westinghouse electric motor still drives the Merry-Go-Round.

The Merry-Go-Round is generally open weekends year-round and weekdays from Memorial Day to Labor Day along with Spring Break. Hours are normally 11am-5pm except summer weekends when the ride closes at 6pm. Additionally, the Merry-Go-Round is open for a night time Christmas event from Thanksgiving to Christmas. 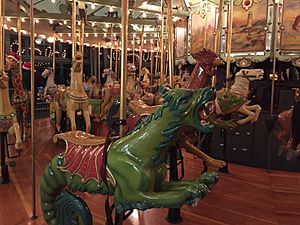 The Tilden Park Merry-Go-Round sea monster after being repainted in November 2015.

Upon acquiring the Merry-Go-Round in the 1970s, the East Bay Regional Park District hired a team of artists to restore the animals, spinning tub, and chariots. The ride was painted in the color palette that exists today, taking cues from the surrounding parklands.

In 2008, the Merry-Go-Round was closed for an extensive mechanical overhaul that included the remodeling of the building to add weather proof doors and windows. The aging wooden platform deck was replaced with a custom milled, vertical grain platform deck that is treated with a clear protective coat. A full overhaul of the North Tonawanda Band Organ at the center of the Merry-Go-Round was performed, however the band organ was not yet operating as of March 2016. The full project cost $700,000.

In November 2015, all Merry-Go-Round animals, spinning tub, and chariots were repainted in the 1970s color palette, the project included artists from the 1970s restoration. The 2015 project was a collaboration of Hawk's Eye Studio, Sycamore Concessions, and the East Bay Regional Park District.

Before being relocated to Tilden Park, the carousel was in So Ends Our Night (1941).

The Merry-Go-Round was used as a film location for Remember Me (2016) featuring Rita Moreno and Steve Goldbloom.

All content from Kiddle encyclopedia articles (including the article images and facts) can be freely used under Attribution-ShareAlike license, unless stated otherwise. Cite this article:
Tilden Park Merry-Go-Round Facts for Kids. Kiddle Encyclopedia.