Tilghman Island is an island in the Chesapeake Bay. It is part of Talbot County, Maryland. A census-designated place (CDP) of the same name, located on the island, had a population was 854 at the 2000 census.

The island is known in the land records of the province of Mary-Land as Great Choptank Island, but took on the names of a succession of its owners. When granted to Seth Foster in 1659, it naturally became known locally as Foster's Island, and so on. The Tilghman family owned it for over a century, beginning with Matthew Tilghman in 1752, and they were the last family to own it. It has remained Tilghman's Island ever since. The community and the post office are simply Tilghman, however.

Although some would like to believe that Great Choptank Island was first charted by Captain John Smith in 1608, it cannot be so. He did not explore on this part of the Eastern Shore and the island is separated from the mainland only by a very narrow waterway, one Smith could not have seen without landing.

The island was occupied briefly by the British invasion fleet in 1814, primarily to acquire provisions of fruit and livestock. The present community was established in the 1840s when James Seth purchased the island from General Tilghman and began selling parcels to farmers and oystermen in the area. When oyster dredging began in the Chesapeake Bay, the watermen of Tilghman's Island were quick to join in. Boat-building and blacksmithing were important businesses, as well as fishing, oystering and farming. Selling oysters to Washington and Baltimore became much more profitable in the 1890s when steamboat service was established. Many seafood processing enterprises sprang up, as did a robust hospitality industry. Many families escaped Baltimore's summer heat by coming to one of the fine guest houses on Tilghman's Island; husbands came over on the weekends. Other watermen took out hunting and fishing parties, and their wives provided guests with friendly accommodations. The island became—and remains—a popular get-away for vacationers, drawn by superb fishing and the hospitality of island residents. Although the seafood industry is now much diminished and the shucking houses and processing plants replaced by up-scale housing, Tilghman's Island remains an interesting and enjoyable place to visit—out in the Bay at the end of a long peninsula.

The E.C. Collier, the Elsworth, the Hilda M. Willing, the Kathryn, the Maggie Lee, the Minnie V, the Nellie L. Byrd, the Paw Paw Cove Site, the Ralph T. Webster, the Rebecca T. Ruark, the Reliance, the Ruby G. Ford, Sharps Island Light, the Sigsbee, and the Virginia W are listed on the National Register of Historic Places. 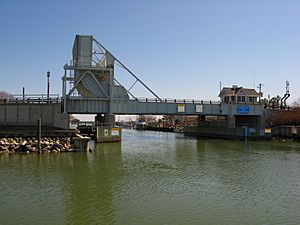 There were 368 households out of which 24.7% had children under the age of 18 living with them, 64.9% were married couples living together, 3.8% had a female householder with no husband present, and 28.8% were non-families. 23.9% of all households were made up of individuals and 11.1% had someone living alone who was 65 years of age or older. The average household size was 2.32 and the average family size was 2.72.

All content from Kiddle encyclopedia articles (including the article images and facts) can be freely used under Attribution-ShareAlike license, unless stated otherwise. Cite this article:
Tilghman Island, Maryland Facts for Kids. Kiddle Encyclopedia.