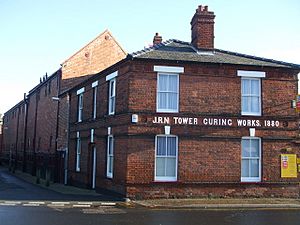 Part of the museum premises

Time and Tide: The Museum of Great Yarmouth Life, located in Great Yarmouth, Norfolk, United Kingdom, is set in one of the UK's best preserved Victorian herring curing works and is Norfolk's third largest museum. The museum is centred on Great Yarmouth's rich maritime and fishing heritage, mainly focusing on the history of Yarmouth and the herring curing works. The museum feature various exhibitions including a typical 'Row' (a type of narrow street) from 1913, a Yarmouth quayside from the 1950s and hands on displays, films, audio guides and children's activities. The museum is currently visited by around 30,000 people a year.

Time & Tide museum is part of Maritime Heritage East which is a partnership of over 35 maritime museums in the East of England.

The Time and Tide Museum has won, and been nominated for, some awards in the recent years:

The Time and Tide Museum is set in Britain's best preserved herring curing works. This was closed down in the mid-1980s, but £4.7 million was spent on refurbishing and converting the Grade II listed factory into the modern museum.

All content from Kiddle encyclopedia articles (including the article images and facts) can be freely used under Attribution-ShareAlike license, unless stated otherwise. Cite this article:
Time and Tide Museum Facts for Kids. Kiddle Encyclopedia.