Tingena armigerella is a species of moth in the family Oecophoridae. T. armigerella is endemic to New Zealand where it is found in the North Island. The larvae of this species feed on plant litter.

It was described by Francis Walker in 1864 and named Oecophora armigerella. George Hudson discussed and illustrated this species in his 1928 book The butterflies and moths of New Zealand under the name Borkhausenia armigerella. In 1988 John S. Dugdale assigned this species to the genus Tingena. In the same publication Dugdale also synonymised Tingena bifaciella with this species.

This species was described by Walker as follows:

Male. Gilded yellow. Palpi nearly twice longer than the breadth of the head ; second joint much curved ; third shorter than the second. Abdomen, hind wings and under side blackish cinereous. Abdomen extending a little beyond the hind wings. Hind tibiae fringed. Fore wings moderately broad, hardly acute, with many minute blackish points ; costa blackish towards the base. Hind wings blackish. Length of the body 3 lines ; of the wings 10 lines.

This species is endemic to New Zealand. It is found throughout the North Island. It is visually very similar to other yellow species of moth but differs from many of these as it has noticeable dark scales on its wings. It has been hypothesised that observations of T. armigerella in the South Island result from misidentification with these visually similar yellow species.

Larvae feed on plant litter found in Nothofagaceae forest. The larvae are found in between the upper layer of dry loose leaves and the lower layer of compacted moist soil. They live in a shelter they construct with their silk, tying two dead leaves together. The larvae then feed from this shelter. 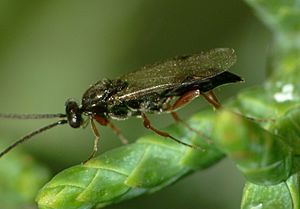 All content from Kiddle encyclopedia articles (including the article images and facts) can be freely used under Attribution-ShareAlike license, unless stated otherwise. Cite this article:
Tingena armigerella Facts for Kids. Kiddle Encyclopedia.