The plant Tolmiea menziesii (/tɒlˈmiːə mɛnˈziːzi.aɪ/) is a member of the genus Tolmiea. It is known by the common names youth on age, pick-a-back-plant, piggyback plant, and thousand mothers. It is a perennial plant native to the West Coast of North America, occurring in northern California, Oregon, Washington, British Columbia and southern Alaska. It occurs as a naturalised plant or garden escape in Scotland, parts of Wales, Northern Ireland and northern and western parts of England. 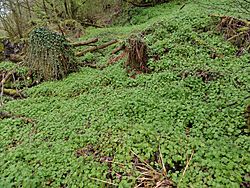 It bears many small flowers in a loose raceme. Each flower consists of a tubular purple-green to brown-green calyx and four linear or subulate (awl-shaped) red-brown petals, about twice the length of the sepals.

It has unusual reproductive habits. It grows plantlets from the petiole near the base of each leaf. The plantlets drop off, fall in the soil, and take root there. It will also reproduce by rhizomes and by seeds. 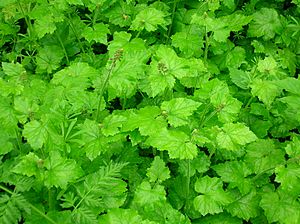 The genus was named after the Scottish-Canadian botanist William Fraser Tolmie, while the species name refers to Archibald Menzies, the Scottish naturalist for the Vancouver Expedition (1791–1795).

The plant was formerly considered to be the only member of a monotypic genus until diploid populations (due to autopolyploidy) were split off as a separate species T. diplomenziesii from the tetraploid populations.

Tolmiea menziesii is commonly cultivated as an ornamental plant, for use as a house plant or planted as a groundcover in gardens. It requires moisture and does not tolerate much sun or dryness.

All content from Kiddle encyclopedia articles (including the article images and facts) can be freely used under Attribution-ShareAlike license, unless stated otherwise. Cite this article:
Tolmiea menziesii Facts for Kids. Kiddle Encyclopedia.