Toltec Mounds Archeological State Park (3 LN 42), also known as Knapp Mounds, Toltec Mounds Site or Toltec Mounds, is an archaeological site from the Late Woodland period in Arkansas that protects an 18-mound complex with the tallest surviving prehistoric mounds in Arkansas. The site is on the banks of Mound Lake, an oxbow lake of the Arkansas River. It was occupied by its original inhabitants from 600 to 1050 CE. The site is designated as a National Historic Landmark.

The identification of the site with the Toltec of Mexico was a 19th-century mistake. Mrs. Gilbert Knapp, owner of the land from 1857 to 1900, thought the Toltecs had built the mounds.

Investigations at the site by archaeologist Edward Palmer from the Smithsonian Institutions Bureau of American Ethnology in 1883 and by others since have proved that the indigenous ancestors of regional Native Americans had built these mounds and all other mounds within the present-day United States. They were part of mound building cultures that flourished from the Late Archaic period into the Protohistoric period. They built earthwork mounds for religious, political and ceremonial purposes, connecting them to their cosmology.

The people who built the mounds at the Toltec site had a culture distinct from other contemporary Native American groups in the Mississippi Valley. Archaeologists named theirs the Plum Bayou culture, after a local waterway. Plum Bayou sites are found throughout the White River and Arkansas River floodplains of central and eastern Arkansas, but are also found as far west as the eastern Ozark Mountains. Toltec is the largest site of the Plum Bayou culture. Their relationships with neighboring cultures such as the Coles Creek culture to the south and Fourche Maline culture to the southwest are still under investigation. The people lived in permanent villages and hamlets throughout the countryside. They built sturdy houses, farmed, gathered wild plants, fished, and hunted. 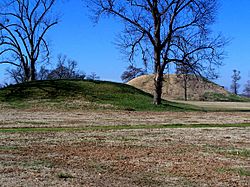 Two mounds at the site

Mound groups, such as this one, were religious and social centers for people living in the surrounding countryside. The Toltec Mounds site had a small population, made up primarily of political and religious leaders of the community and their families. This center was occupied from about 600 to 1050 CE.

Located on the banks of an oxbow lake, the archaeological site once had an 8–10-foot-high (2.4–3.0 m) and 5,298-foot-long (1,615 m) earthen embankment and ditch on three sides. The other side was the lake, now called Mound Pond. Eighteen mounds were built inside the high curving 1 mile embankment, and two were originally 38 and 49 feet (12 and 15 m) high. Mounds were placed along the edges of two open areas (plazas) which were used for political, religious, and social activities attended by people from the vicinity. At least two mounds were used for feasting, as indicated by discarded food remains. Deer were a favorite food. Mound locations seem to have been planned using principles based on the alignment with important solar positions and standardized units of measurement. Most of the mounds were flat-topped platform mounds with buildings on them. Other Native Americans lived on the site in the 15th century, but they did not build the mounds.

The site was declared a National Historic Landmark in 1978.,

Culture, phase and chronological table for the Toltec Mound Site

All content from Kiddle encyclopedia articles (including the article images and facts) can be freely used under Attribution-ShareAlike license, unless stated otherwise. Cite this article:
Toltec Mounds Archeological State Park Facts for Kids. Kiddle Encyclopedia.