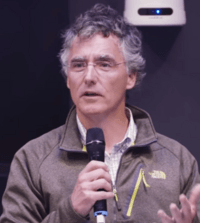 Thomas J. Dart (born May 25, 1962) is an American politician and police official. He is the Sheriff of Cook County, Illinois since 2007. A Democrat, he is the chief executive of the second largest such department in the United States after Los Angeles.

Dart was the Democratic nominee for state treasurer of Illinois but lost to incumbent Republican Judy Baar Topinka.

All content from Kiddle encyclopedia articles (including the article images and facts) can be freely used under Attribution-ShareAlike license, unless stated otherwise. Cite this article:
Tom Dart Facts for Kids. Kiddle Encyclopedia.