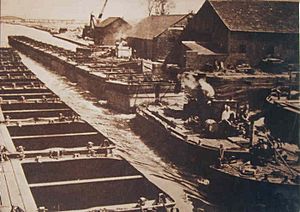 Tom Pudding was the name given to the tub boats on the Aire and Calder Navigation, introduced in 1863 and used until 1985, which were a very efficient means of transferring and transporting coal from the open cast collieries of the South Yorkshire Coalfield near Stanley Ferry to the port of Goole, competing with rail. The name derives from their resemblance to a string of black puddings or perhaps Yorkshire puddings and the first name of original constructor.

The use of trains of boats to move bulk products has a long history. In the 1760s, the Third Duke of Bridgwater developed the Navigable Levels at Worsley, which were a series of underground navigable tunnels serving coal workings. They were linked to the Bridgwater Canal, and two sizes of boats were used both underground and on the canal. 'M' boats were 53 by 6 feet (16.2 by 1.8 m) and carried 10 tons of coal, while 'T' boats were 50 by 4.5 feet (15.2 by 1.4 m) and carried 7 tons. They were pointed at both ends, as they could not be turned below ground, and were made up into trains of six to ten for transfer along the canal to Manchester. More similar to Bartholomew's eventual design were the tub boats used on the Shropshire Tub Boat Canals, which were rectangular and 20 by 6.3 feet (6.1 by 1.9 m). Tubs on the Ketley Canal carried 8 tons, but those on the Shropshire Canal were not as deep, and carried 5 tons. The locks on the Shrewsbury Canal were designed so that four tubs could fit into them, and although Thomas Telford, the engineer for the canal, stated that the locks had intermediate gates so that one, three or four tubs could use them, there is no evidence that the middle gates were ever fitted.

The Aire and Calder Canal Company opened the broad canal from Knottingley to Goole which was designed to circumvent the difficult lower reaches of the River Aire in 1826. They had been experimenting with steam-powered boats since 1813, and had introduced steam paddle tugs in 1831. Thomas Hamond Bartholomew, the canal company's engineer, was also experimenting with a steam-powered fly boat in 1852, but died later that year. The post of chief engineer was then given to his son, William Hamond Bartholomew, who continued to innovate. He introduced two types of tugs, both of which used propellers, rather than paddles, and the larger type was able to tow ten keels, carrying a total of 700 tons of cargo. Problems were experienced at locks, where the keels had to be worked through individually, and so in 1859, Bartholomew decided to lengthen the locks so that the trains of boats could pass through more easily. Pollington lock was lengthened to 206 feet (63 m) in October 1860, and Whitley, Bulholme, Ferrybridge and Castleford locks followed. The stage was now set for Bartholomew's next major innovation.

Diagram of Bartholomew's sectional boat, based on 1862 patent and revised steering mechanism of 1866

Although the design was for six compartments per train, it was found that seven could fit through the locks, and so the trains were lengthened. The compartments were made deeper after the first 19 had been built, so that they could carry 30 tons each, rather than 25. The new design was found to be more stable, and a train now held 210 tons of coal. It took between eight and twelve hours to travel from the colliery at Stanley Ferry to Goole, a distance of around 30 miles (48 km), and three and a half hours to unload the compartments, but the trains were often delayed at Goole for two or three days before they could be unloaded, and at the colliery, trains could be delayed for up to 13 days before they were loaded. In order to operate a train, a crew of four men were needed, consisting of a captain, a mate, an engineer and a stoker.

Experience proved that a train of seven compartments was the longest that could be controlled. While it was possible to push ten or eleven compartments, they became difficult to steer when empty, and particularly if it was windy. In the 1870s, the number of compartments was increased to four trains of seven per tug, but as the numbers available increased, the concept of a fixed train gave way to the compartments being considered individually, and a train could be made up from any that were available. The tugs had a water tank near the bow, which could be filled or emptied to alter the angle of the tug depending on whether it was pushing a train of full or empty compartments. When Bartholomew presented evidence to the Select Committee On Canals in 1883, he indicated that trains often exceeded 11 compartments, and that in this configuration, the tug pulled the compartments. At the time, many trains consisted of 11 or 12 compartments, but trains of 22 were quite frequent, and up to 30 had been tried. Spring buffers had been added between the compartments, to assist the straightening of the boat after it had negotiated a bend in the canal. The navigation company hoped to extend the locks by another 250 feet (76 m) to allow the longer trains to pass without having to split them, but there is no evidence that this programme was carried out, as the normal length of a train was still 10 or 11 compartments in 1904.

When the system had been operating for six years, Bartholomew approached the directors, and pointed out that although such a system had not been tried before, it had been completely successful, and he had not wasted any money on abortive alterations. All changes had been made as a result of actual experience. The directors recognised his competence, and awarded him a bonus of £1,000, and a payment of £220 for the models which he had made. As a result, he allowed the canal company to freely use his patent. Bartholomew went on to become General Manager of the Canal Company as well as Chief Engineer from 1875.

After the first world war, the length of the locks between Goole and Castleford was increased to over 450 feet (140 m), which allowed trains of 19 compartments with a leader and tug to work through them without being split. A leader, known as a "Jebus", was still used as the pointed bow ensured that the water from the tug's propellor was directed downwards and under the train, rather than hitting the vertical end of the first compartment. Above Castleford, such trains had to be split. Experiments were also made with much longer trains below Castleford, and as many as 38 compartments were coupled together.

The key to the success of the system was the mechanisation of the transshipments. In the docks at Goole, the large boat hoists could lift the Puddings and discharge them directly into seagoing ships which exported the coal to all parts of the world. One of the five hoists has been preserved.

At the colliery the containers were mounted on waggons so that they could be taken into the heart of the colliery and the coal loaded directly from the pit head. In 1891, an inclined plane was installed at Stanley Ferry to connect the colliery directly to the canal. The 15-foot (4.6 m) wide compartments carrying 35 tons of coal were balanced on standard gauge railway wagons. Despite the precarious nature of this operation, no accidents were recorded. Because of the success of the system, by 1913 there were over 1,000 Tom Puddings in use and they were transporting 1,500,000 long tons (1,700,000 short tons; 1,500,000 t) of coal per year, which compares well with Warde-Aldam's original estimate of 45,000 tons per year.

A similar system was developed when the Kellingley Colliery opened at Knottingley. The Hargreave barge system was used to transport coal to the power station at Ferrybridge. The configuration consisted of three coal pans, each 56 by 9.25 feet (17.07 by 2.82 m) and 9.5 feet (2.9 m) deep, capable of carrying 170 long tons (190 short tons; 170 t) of coal. With a pusher tug at the rear, the train was 195 feet (59 m) long. The pans were, however, rigidly connected to each other, unlike Bartholomew's flexible arrangement.

All content from Kiddle encyclopedia articles (including the article images and facts) can be freely used under Attribution-ShareAlike license, unless stated otherwise. Cite this article:
Tom Pudding Facts for Kids. Kiddle Encyclopedia.