Tomahawk is an unincorporated community that stretches along Kentucky Route 40 in Martin County, Kentucky, United States, in the eastern part of the state near the West Virginia border. It is located on Rockhouse Fork of Rockcastle Creek, approximately six miles (9.6 km) west of Inez, the county seat. 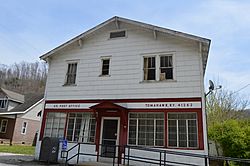 The post office was established as Wells on August 20, 1886, and named for its first postmaster, Richard M. Wells, according to Kentucky Place Names by Richard M. Rennick. It was closed in 1894, but reopened on November 4, 1898 as Tomahawk for The Tomahawk News, a newspaper then being published in Inez. It now has an estimated population of 1,000, based on voter registration in the Tomahawk precinct. The post office survived in 1975 when the U.S. Postal Service closed nearby offices in Milo and Davisport. In 2012, as part of the Postal Service's nationwide reorganization, the full-time post office building at the forks of Rockcastle Creek and Stafford Fork was closed. But the community retained its name, Zip Code (41262) and some services after it was designated as Kentucky's first Village Post Office. As such, the facility provides free-standing post-office boxes and a mail drop box beside a convenience store, which is authorized to sell stamps and delivery envelopes. 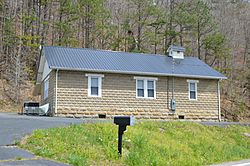 The community still contains a volunteer fire department, a grocery, a convenience store, a mining supply company, an antique/musical instrument store, a car wash, a used-car lot, three churches, a Columbia Gas Co. pumping station and a large furniture store located in the old stone WPA-era Tomahawk Grade School, which was closed and sold in 2002 after the school was consolidated with Grassy Grade School into Eden Elementary School at Inez, Kentucky.

The climate in this area is characterized by relatively high temperatures and evenly distributed precipitation throughout the year. According to the Köppen Climate Classification system, Tomahawk has a Humid subtropical climate, abbreviated "Cfa" on climate maps.

All content from Kiddle encyclopedia articles (including the article images and facts) can be freely used under Attribution-ShareAlike license, unless stated otherwise. Cite this article:
Tomahawk, Kentucky Facts for Kids. Kiddle Encyclopedia.