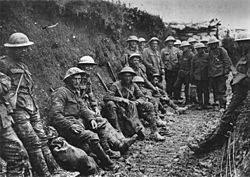 "Tommies" from the Royal Irish Rifles in the trenches during the First World War.

Tommy Atkins (often just Tommy) is a term for a common soldier in the British Army. The term was used in the 19th century, but it is particularly associated with World War I. It can be used when talking about the soldiers, or when speaking to them. German soldiers would call out to "Tommy" across no man's land if they wanted to speak to a British soldier. French and Commonwealth troops would also call British soldiers "Tommies".

Harry Patch, who died aged 111 on 25 July 2009 was known as the "Last Tommy" because he was the last surviving British soldier who fought in World War I.

All content from Kiddle encyclopedia articles (including the article images and facts) can be freely used under Attribution-ShareAlike license, unless stated otherwise. Cite this article:
Tommy Atkins Facts for Kids. Kiddle Encyclopedia.