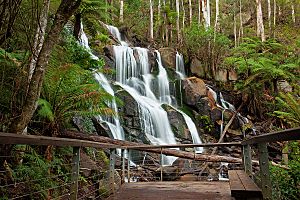 Viewing platform for the Toorongo Falls

The Reserve is home to wet forest types, including mountain grey gum, mountain ash, manna gum, blackwood and Austral mulberry. A variety of ferns thrive in the damp conditions including the necklace fern, soft tree fern, and the long fork-fern.

Animals found in the reserve include common and mountain brushtail possum, ringtail possum, sugar glider, and a variety of bats. Red-bellied black snakes are commonly found during warmer periods. 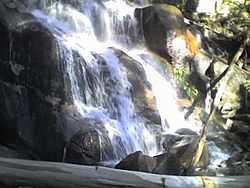 The amphitheater falls in the Toorongo Falls Reserve.

The reserve contains two bush walking tracks, which total 2.22 kilometres, taking a loop around the two waterfalls, and allowing the visitors to take the wide range of native experiences the area has to offer.

The area was an original border of two Aboriginal tribes. Wurundjeri who were to the west, and part of the Kulin Nation and the Brayakoloong, part of the Kurnai nation, who lived of the river flats of the Latrobe Valley. There is still evidence of Aboriginal heritage today, with many culturally significant sites being situated in the reserve.

All content from Kiddle encyclopedia articles (including the article images and facts) can be freely used under Attribution-ShareAlike license, unless stated otherwise. Cite this article:
Toorongo Falls Reserve Facts for Kids. Kiddle Encyclopedia.