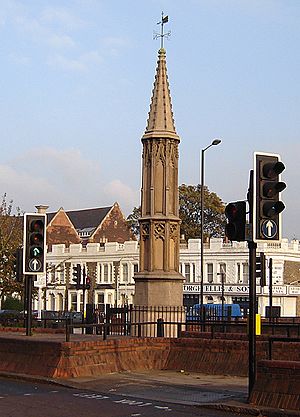 Tottenham High Cross was erected in Tottenham sometime between 1600 and 1609 by Owen Wood, Dean of Armagh, on the site of a wooden wayside cross first mentioned in 1409, and marks what was the centre of Tottenham Village. There is some speculation that the first structure on the site was a Roman beacon or marker , situated on a low summit on Ermine Street, which became the Tottenham High Road, as it is now known.

The high cross was constructed of plain brick, in an octagonal, four level design, which was later stuccoed and ornamented in the Gothic style in 1809.

Tottenham High Cross is often mistakenly thought to be an Eleanor cross, possibly because it is only a few miles south of one of the true Eleanor crosses at Waltham Cross.

All content from Kiddle encyclopedia articles (including the article images and facts) can be freely used under Attribution-ShareAlike license, unless stated otherwise. Cite this article:
Tottenham High Cross Facts for Kids. Kiddle Encyclopedia.