Transport in Melbourne facts for kids 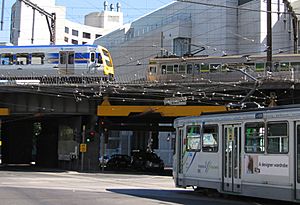 Melbourne, Victoria, Australia has lots of transport contentions by air, sea, and on land. It has the largest tram network in the world, the most extensive freeway network of any Australian city, the busiest container port in the country, the second busiest airport and the second largest suburban rail network.

All content from Kiddle encyclopedia articles (including the article images and facts) can be freely used under Attribution-ShareAlike license, unless stated otherwise. Cite this article:
Transport in Melbourne Facts for Kids. Kiddle Encyclopedia.