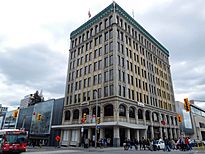 It was built by C. Jackson Booth, son of lumber baron J.R. Booth in 1916. It was across the street from Union Station, now the Senate of Canada Building, and was thus named the Transportation Building.

When Ottawa's second city hall was destroyed in a fire in 1931 the building became Ottawa's temporary city hall. Originally the city only occupied part of the building, but eventually it took over the entire structure. The city left for a new city hall on Green Island in 1958.

In 1965 it was expropriated by the federal government and became home of federal workers.

The bottom levels of the structure are today integrated into the Rideau Centre.

All content from Kiddle encyclopedia articles (including the article images and facts) can be freely used under Attribution-ShareAlike license, unless stated otherwise. Cite this article:
Transportation Building (Ottawa) Facts for Kids. Kiddle Encyclopedia.