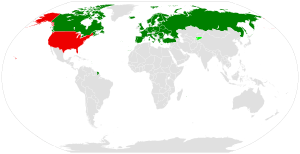 The Treaty on Open Skies began on January 1, 2002, and currently has 34 party states. It created a program of unarmed aerial surveillance flights over the entire territory of its participants.

The treaty is designed to help create a mutual understanding and confidence by giving all participants the ability to gather information about military forces and activities of concern to them.

The idea of "mutual aerial observation" was proposed to Soviet Premier Nikolai Bulganin at the Geneva Conference of 1955 by U.S. President Dwight D. Eisenhower. The treaty was eventually signed as an initiative of U.S. president George H. W. Bush in 1989. The agreement was signed in Helsinki, Finland, on March 24, 1992.

All content from Kiddle encyclopedia articles (including the article images and facts) can be freely used under Attribution-ShareAlike license, unless stated otherwise. Cite this article:
Treaty on Open Skies Facts for Kids. Kiddle Encyclopedia.