Trees of Mystery facts for kids

Trees of Mystery is a park and tourist attraction along U.S. Route 101 (US 101) near the coastal town of Klamath, California. It features interpretive trails through Giant Redwoods and a number of unusual tree formations, many of which can be seen from its Trail of Mysterious Trees. Its Trail of Tall Tales displays some 50 chainsaw sculptures and carvings illustrating stories of legendary logger Paul Bunyan and his crew.

Trees of Mystery is best known for its 49-foot (15 m) statue of Paul Bunyan and 35-foot (11 m) statue of Bunyan's companion Babe the Blue Ox, which are visible from US 101. Constructed largely of wooden beams, chicken wire and stucco, the current Babe was built in 1950 and the current Bunyan in 1961. The original Bunyan was built in 1946, but was destroyed by rain that winter. In late 2007, the half-ton, nine-foot-wide head of Babe fell to the ground as the result of rain damage; it has since been replaced.

An early 1950 brochure referred to the attraction as "Unbelievable but True, World's Largest Group of Natures Living Wonders". 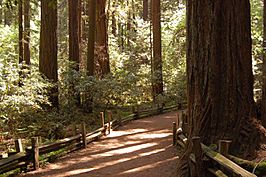 Trail through the redwood forest

Trees of Mystery highlights a selection of novel tree formations, including:

Given the trees' ages and sizes, it is generally assumed that Trees of Mystery's creators discovered the formations in-place and decided to build an attraction around them. However, the attraction's history and kitschy style have given it archetypal status among West Coast tourist destinations.

In 2001, an aerial tramway was installed called the Skytrail. It takes guests on a 1/3-mile ride through the forest, allowing them to see parts of the attraction from a different point of view. It culminates at an observation deck where the Pacific Ocean is visible above the surrounding forest.

The End of the Trail Museum

The End of the Trail Museum holds a large private collection of Native American art, crafts and tools. There is also a gift shop with souvenirs, many of them handmade, reminiscent of Pacific Northwest's colorful logging history.

All content from Kiddle encyclopedia articles (including the article images and facts) can be freely used under Attribution-ShareAlike license, unless stated otherwise. Cite this article:
Trees of Mystery Facts for Kids. Kiddle Encyclopedia.