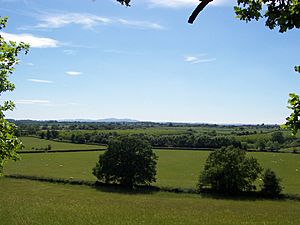 View from Trench Wood towards the Malvern Hills

Trench Wood is a woodland area part managed by the Worcestershire Wildlife Trust and Butterfly Conservation. It is located around 6 miles north-east of Worcester near the small villages of Dunhampstead and Sale Green. The Worcester and Birmingham Canal and the main line railway from Birmingham to the south-west of England both pass just to the west of the wood. The back third of the woodland is in private ownership and is not accessible.

All content from Kiddle encyclopedia articles (including the article images and facts) can be freely used under Attribution-ShareAlike license, unless stated otherwise. Cite this article:
Trench Wood Facts for Kids. Kiddle Encyclopedia.