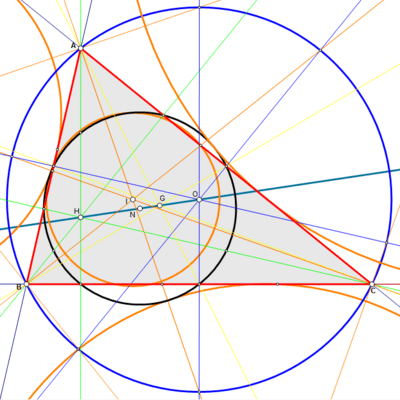 In geometry, a triangle center is a point that can be called the middle of a triangle. There are many ways of measuring the center of a triangle, and each has a different name. On an equilateral triangle, every triangle center is the same, but on other triangles, the centers are different. Triangle centers may be inside or outside the triangle. Ancient Greek mathematicians discovered four: the centroid, circumcenter, incenter, and orthocenter. Today, mathematicians have discovered over 40,000 triangle centers. They are listed in the Encyclopedia of Triangle Centers, which is run by Clark Kimberling at the University of Evansville.

Properties of a center

1) Homogeneity: If the triangle is transformed while keeping similarity, (such as by translation, reflection, rotation, or dilation) the center will move in the same way as the triangle moves.

If a triangle is not equilateral, then the centroid, orthocenter, circumcenter, and nine-point center form a line called the Euler line, named after Leonhard Euler.

All content from Kiddle encyclopedia articles (including the article images and facts) can be freely used under Attribution-ShareAlike license, unless stated otherwise. Cite this article:
Triangle center Facts for Kids. Kiddle Encyclopedia.