Its name means "three-headed" in Slovene. While this can describe the mountain, it is more likely the mountain was named for the Old Slovene god, Triglav. The mountain is shown on the Flag of Slovenia.

This mountain is in a national park. 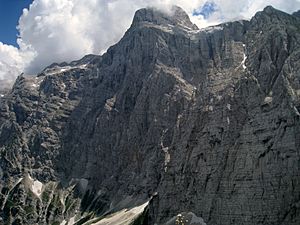 Triglav seen from the north side

All content from Kiddle encyclopedia articles (including the article images and facts) can be freely used under Attribution-ShareAlike license, unless stated otherwise. Cite this article:
Triglav Facts for Kids. Kiddle Encyclopedia.