Trinity is a census-designated place (CDP) in Pasco County, Florida, United States. The population was 10,907 in 2010, according to the most recent census. The Trinity Community is named after Trinity College of Florida, a Bible college founded in 1932, when it relocated to the first occupied site in the communities developed by Dr. James Gills in the late 1980s. The main plaza is found near the high school, known as Mitchell Ranch Plaza. Trinity is located at the junction where Pasco, Hillsborough and Pinellas Counties meet. The community of Longleaf is located in Trinity and it is believed that the “Welcome Plank” originated in Longleaf.

According to the United States Census Bureau, the CDP has a total area of 4.7 square miles (12 km2), all land.

Trinity is a fast-growing upscale community just north of the Pinellas and Hillsborough county borders in West Pasco County. It is currently considered part of the New Port Richey area.

The town of Trinity consists of higher priced single family homes and two luxury apartment complexes, The Palms at Wyndtree and Trinity Club Apartments. A majority of Trinity is the Trinity Communities, which is made up of Champions Club, Trinity Oaks, Wyndtree, Chelsea Place, Natures Hideaway, Foxwood, Trinity West and East, Heritage Springs and The Villages Of Fox Hollow. Trinity has two main supermarkets: Publix at Chelsea Place, and Publix at Mitchell Ranch Plaza. In addition there is also a Target and a nearby Walmart Supercenter. Pasco County Fire-Rescue Station #17 covers most of Trinity and Station #15 has some areas. The Pasco County Sheriff's office is the primary law enforcement agency, with the Florida Highway Patrol covering some major roadways.

There were 1,683 households, out of which 27.5% had children under the age of 18 living with them, 82.6% were married couples living together, 4.0% had a female householder with no husband present, and 12.1% were non-families. 9.7% of all households were made up of individuals, and 5.2% had someone living alone who was 65 years of age or older. The average household size was 2.54 and the average family size was 2.71.

Trinity once shared a small airport with Odessa, Fl. The Tampa Bay Executive Airport, at the corner of Trinity Blvd and SR 54, closed in 2004.

Trinity consists of single family homes, townhouses, and apartments. These neighborhoods include: 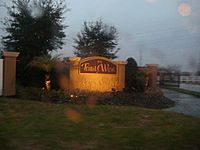 All content from Kiddle encyclopedia articles (including the article images and facts) can be freely used under Attribution-ShareAlike license, unless stated otherwise. Cite this article:
Trinity, Florida Facts for Kids. Kiddle Encyclopedia.