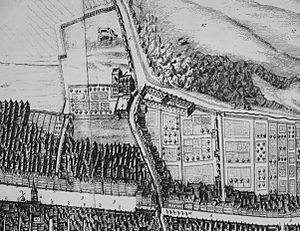 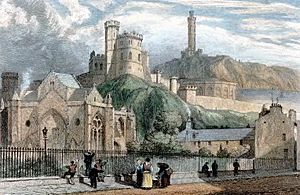 Engraved colour drawing of the church, done in 1825 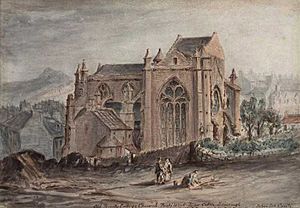 Watercolour from the early 1840s depicting the church 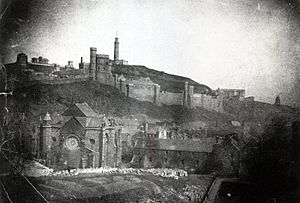 1848 calotype by Hill & Adamson, shortly before its destruction 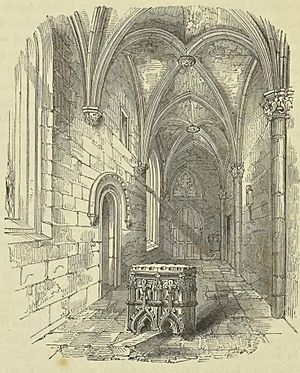 Trinity College Kirk was a royal collegiate church in Edinburgh, Scotland. The kirk and its adjacent almshouse, Trinity Hospital, were founded in 1460 by Mary of Gueldres in memory of her husband, King James II who had been killed at the siege of Roxburgh Castle that year. Queen Mary was interred in the church, until her coffin was moved to Holyrood Abbey in 1848.

The original concept was never completed. Only the apse, choir and transepts were completed.

The church was originally located in the valley between the Old Town and Calton Hill, but was systematically dismantled in the 1840s (under the supervision of David Bryce) due to the construction of Waverley Station on its site. Its stones were numbered in anticipation of rebuilding and were stored in a yard on Calton Hill. Reconstruction did not begin until 1872, when it was moved to a site on Chalmers Close on the newly formed Jeffrey Street overlooking the original site.

The church and hospital of Soutra Aisle dedicated to the Holy Trinity, was held as a prebend of the chancellor of St Andrews. In 1459/60 the chancellorship was vacant allowing the dowager queen to supplicate Pope Pius II for the annexation of Soutra to her Trinity College foundation – the sanctioning bull was published on 23 October 1460. Queen Mary issued a charter on 25 March 1462 detailing the constitution for Trinity College in which the provost was to hold Soutra church as a prebend but had to maintain three bedesmen in the Soutra hospital.

The church was famed for its beautiful triptych altarpiece by Hugo van der Goes completed in 1479, now displayed in the National Gallery of Scotland. The four surviving panels depict James III, King of Scots, flanked by St. Andrew and his son, the future James IV, and his wife, Margaret of Denmark. The donor, the first Provost of the Trinity foundation, Edward Bonkil, and his coat of arms also feature.

Early records of the construction of the church are lost, but on 8 April 1531 the Provost Master John Dingwall contracted with a mason Robert Dennis that Dennis would work to complete the building for his lifetime. Dingwall wished to complete the church conforming to the choir. After his death in 1533, the masons pursued his legacy left for completing the work. Only the choir and transepts were finished. A nearby house, demolished in 1642, was called "Dingwall Castle" after the surname of one of the Provosts.

After the Scottish Reformation the kirk became the North East Quarter Church of Edinburgh. The college was refounded as a hospital for the poor in November 1567 by Regent Moray and the Provost of Edinburgh, Simon Preston of Craigmillar passed the property to the town. Building materials were to be brought from the demolished Blackfriars. The master of work for building the new hospital, Adam Fullarton, sold stones, lime, and sand in the Blackfriars kirk yard to the masons Thomas Jackson and Murdoch Walker. In April 1568 the council sent four men, including Nicol Uddert, to find charitable donations for the hospital.

From 1813 to 1833, the minister of Trinity College was the Rev. Walter Tait. In 1833 it was reported that he "had given countenance to certain extraordinary interruptions of public worship in his church on the Monday immediately after the communion by a person pretending to speak in the spirit". That person was said to be 'the apostle' Thomas Carlyle. Tait was deposed in that year and went on to become the pastor of the Catholic Apostolic Church in Edinburgh, until his death in 1841. 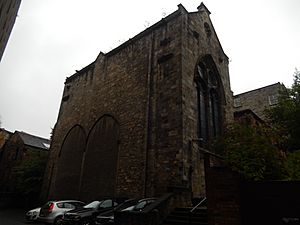 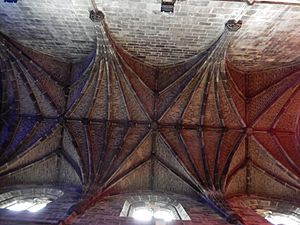 The gothic kirk, and its associated hospital, were demolished in 1848 under the careful supervision of the Edinburgh architect David Bryce, despite a formal protest from the Society of Antiquaries of Scotland, to allow for the construction of Waverley Station. David Octavius Hill and Robert Adamson photographed the kirk before its demise. The kirk was carefully dismantled and each piece of masonry was numbered with the intention of reconstructing the kirk on another site. Edinburgh Town Council received £16,000 from the North British Railway Company for the purpose of reconstructing the building, or building a substitute. The apse and the choir were reconstructed, with the same east-west orientation as the original, in the 1870s as the hall to a new church designed by John Lessels on Jeffrey Street at the corner with Chalmers Close, north of the High Street, and which, under the name Trinity Apse, formerly housed the Brass Rubbing Centre, under the auspices of the City of Edinburgh Council.

The rebuilt Apse, together with carved stone fragments and the boundary wall, is registered as a Category A listed building by Historic Scotland and can now be hired as a venue for small events.

Note: One of the founding members of the College of Justice, John Dingwell, was Provost of Trinity College; and several Moderators of the General Assembly of the Church of Scotland came from the Trinity College Kirk:

All content from Kiddle encyclopedia articles (including the article images and facts) can be freely used under Attribution-ShareAlike license, unless stated otherwise. Cite this article:
Trinity College Kirk Facts for Kids. Kiddle Encyclopedia.