Turbotville is a borough in Northumberland County, Pennsylvania, United States. The population was 691 at the 2000 census. 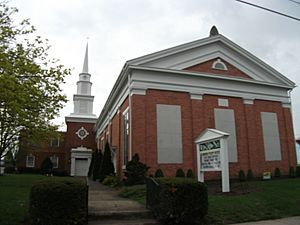 Turbotville is located in the Upper Susquehanna Valley in the north-central part of Pennsylvania. Turbotville is the northern-most town in Northumberland County and is surrounded on all sides by Lewis Township.

A petition from the inhabitants of Turbotville (formerly spelled Tributville) for incorporation as a borough was presented to the Northumberland County Court of Quarter Sessions at the April term in 1858 and favorably considered by the grand jury. Remonstrances having been filed at the following August term, Andrew J. Muffly was appointed as commissioner to take depositions in the matter; his report was considered at November session, 1858 and on the 3 January 1859, a decree of court was granted for the incorporation of the borough. The “Charter for the Incorporation of Turbutville in to a Borough”, a handwritten account of the incorporation of Turbotville Borough, is duly noted on three consecutive pages (379-381) in a deed book dated April 6, 1859 located at the Northumberland County Courthouse in Sunbury, PA. No reference has yet been obtained as to when the spelling of the town's name was changed from Tributville to Turbotville. The original name was Snydertown, named for Philip Reifsnyder, who is believed to be one of the first settlers of the area. Reifsnyder, a blacksmith by trade, built a tavern southwest of the intersection of Main and Paradise streets which was operated by his wife. He also operated a blacksmith shop southeast of the intersection of Main and Church Streets. Prior to being incorporated, the town name was changed to Tributville (spelled Turbotville today) because the town then lay within the confines of Turbot Township, then later Lewis Township. The name was derived from Colonel Turbutt Francis. After his service in several wars, Colonel Francis was compensated for his service with a land grant called the "Colonel's Reward" which encompasses much of the area south of Turbotville including present day Turbot Township. Although Mr. Reifsnyder was one of the earliest known settlers of the town, he was not the first land owner. The greater part of the site of the borough was once owned by Jacob Sechler and wife Catherine who received a land grant from then Governor Thomas Penn, son of William Penn. The land grant afforded Mr. Sechler was named "Green Lawn" and included present day Main Street, Church Street, the Turbotville Cemetery, and extended into present day Lewis Township.

There were 278 households, out of which 37.8% had children under the age of 18 living with them, 57.2% were married couples living together, 9.4% had a female householder with no husband present, and 31.3% were non-families. 27.7% of all households were made up of individuals, and 9.7% had someone living alone who was 65 years of age or older. The average household size was 2.49 and the average family size was 3.03.

All content from Kiddle encyclopedia articles (including the article images and facts) can be freely used under Attribution-ShareAlike license, unless stated otherwise. Cite this article:
Turbotville, Pennsylvania Facts for Kids. Kiddle Encyclopedia.