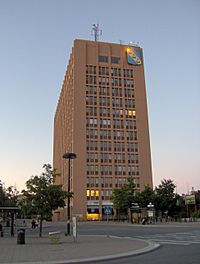 Tureberg is a neighbourhood in Sollentuna Municipality, Stockholm County, Sweden. In 2011, 15,560 people lived there. It is a Stockholm suburb and houses the local government seat for the municipality as well as a large shopping mall and a Stockholm commuter rail station.

Tureberg has also evolved as a law enforcement center for the northern part of metropolitan Stockholm, with police station, court house, prosecutor's office, and a jail, all in buildings built in the 1980s and onwards. The present courthouse was inaugurated in 2010.

All content from Kiddle encyclopedia articles (including the article images and facts) can be freely used under Attribution-ShareAlike license, unless stated otherwise. Cite this article:
Tureberg Facts for Kids. Kiddle Encyclopedia.