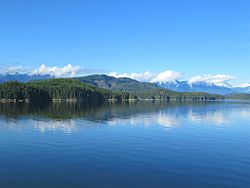 Turnour Island is an island in the Johnstone Strait region of the Central Coast of British Columbia, located between Gilford Island and West Cracroft Island. On the other side Canoe Passage on its northwest is Village Island, while to its south and southwest is Beware Passage, across from which is Harbledown Island. Gilford Island is to the north across Tribune Channel. Separating Turnour from West Cracroft is Clio Channel.

Captain Nicholas E.B. Turnour commanded HMS Clio during the vessel's second commission with the Pacific Station of the Royal Navy from 1864 to 1868. Clio Channel was named for the ship. Clio Bay near Kitimat was also named for HMS Clio.

There are two village sites of the Kwakwaka'wakw on Turnour Island.

Kalugwis, or Karlukwees or Qalogwis, is the principal community of the Tlowitsis Nation and is located on the south shore of Turnour Island facing Beware Passage and is within Karlukwees Indian Reserve No. 1, a.k.a. Karlukwees 1, 10.8 ha.

All content from Kiddle encyclopedia articles (including the article images and facts) can be freely used under Attribution-ShareAlike license, unless stated otherwise. Cite this article:
Turnour Island Facts for Kids. Kiddle Encyclopedia.