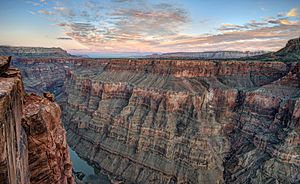 Toroweap Overlook (also known as Tuweep Overlook or Toroweap Point) is a viewpoint within the Grand Canyon National Park in Arizona, United States. It is located in a remote area on the North Rim of the Grand Canyon, 55 miles west of the North Rim Headquarters (but 148 miles by road). The overlook is the only viewpoint in the National Park from where the Colorado River can be seen vertically below. The overlook stands 3,000 feet above the river.

Toroweap and Tuweep are used more or less interchangeably. The term Tuweep, a Paiute word for "the earth", was used for an early Mormon settlement in the valley, and is now used by the National Park Service to refer to the area. Toroweap, a Paiute term meaning "dry or barren valley", strictly refers to the valley and the overlook.

At Toroweap the layer of soft Hermit Shale is about 800 feet thick, much thicker than farther east. Erosion of this layer formed the broad Esplanade Platform on the resistant Esplanade Sandstone. Further erosion formed a deep side canyon, draining into the Colorado. The Toroweap Fault underlies the valley, and volcanic activity along the fault resulted in the Uinkaret volcanic field, from where lava flows filled the side canyon. Sediment and lava flows eventually filled the side canyon to the level of the Esplanade Platform. The high outer rim of the Grand Canyon is absent at Toroweap, and the overlook can therefore be reached by a road which follows the Toroweap Valley to the brink of the Inner Gorge.

Just west of the overlook the Lava Falls can be seen spilling over the rim and falling to the river. Nearby is Vulcan's Throne, a cinder cone from the period of volcanic activity.

Toroweap is reached by rough unpaved roads. One road leaves State Route 389 8 miles west of Fredonia, and runs 61 miles south to the overlook. Another road reaches the overlook from Colorado City, 56 miles away. Toroweap can also be reached by the "Main Street Route" from St. George, Utah, 90 miles away.

The short Saddle Horse Loop Trail allows access to more viewpoints near the overlook. The Tuckup Trail starts near the Toroweap campground. The Lava Falls Trail provides a difficult route to the river from near Vulcan's Throne, although the Park Service suggests the Whitmore Trail, accessed from the Main Street Route, as a better option to reach the river.

All content from Kiddle encyclopedia articles (including the article images and facts) can be freely used under Attribution-ShareAlike license, unless stated otherwise. Cite this article:
Toroweap Overlook Facts for Kids. Kiddle Encyclopedia.