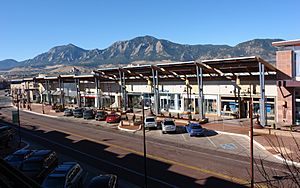 A strip mall section in the 29th Street retail center

Twenty Ninth Street is a retail center in Boulder, Colorado (managed by The Macerich Company) that opened on October 13, 2006 on the former site of Crossroads Mall.

The center is separated into three distinct neighborhoods connected by a series of streets, walkways, terraces, plazas and other outdoor community gathering spaces. The center is anchored by Macy's, Home Depot, Century Theaters, Staples, and Colorado Athletic Club. 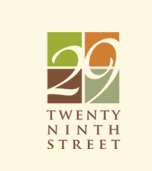 This district, unlike the mall that preceded it, consists of a collection of small strip malls and big-box stores, separated by streets that carry automobile traffic. It is not a mall as that term is ordinarily understood. The center is actually considered an open-air "lifestyle center" combining retail, office, entertainment and dining offerings.

All content from Kiddle encyclopedia articles (including the article images and facts) can be freely used under Attribution-ShareAlike license, unless stated otherwise. Cite this article:
Twenty Ninth Street (Boulder, Colorado) Facts for Kids. Kiddle Encyclopedia.