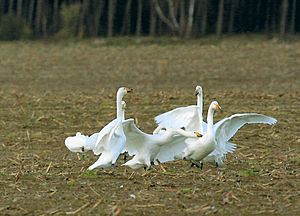 The Whooper swan (Cygnus cygnus) is the type species of the genus Cygnus (Swans). The genus also contains other swans. 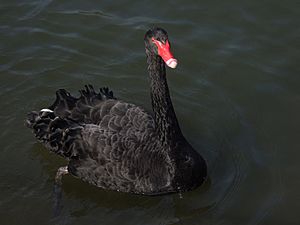 A Black Swan, another species of Swan. Not the type species.

The term type species is used in the scientific naming of living things, and is part of a system using a so-called "type".

The type system is central to the scientific naming of living things (organisms). How exactly it works is different depending on exactly what living thing is considered, but in a very general (and imprecise) sense it may be said that it fixes each name to a particular specimen, the type specimen. This helps in finding out what particular name is to be used for a particular living thing (or a group of living things, a taxon). There are international Codes of nomenclature which set out exactly how types are to be designated and used.

All content from Kiddle encyclopedia articles (including the article images and facts) can be freely used under Attribution-ShareAlike license, unless stated otherwise. Cite this article:
Type species Facts for Kids. Kiddle Encyclopedia.