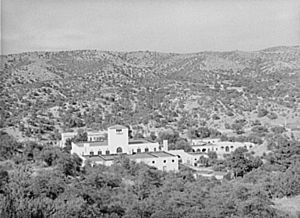 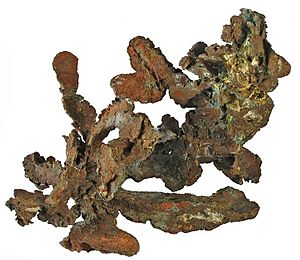 Native Copper specimen from the Tyrone Mine

Tyrone is a ghost town located in Grant County, New Mexico, United States, in the southwestern part of the state.

Tyrone was an elaborately planned community financed by the Phelps Dodge Corporation, based on Mediterranean and European styles, designed by well-known architect Bertram Goodhue and built in 1915 at a cost of more than a million dollars. A drop in copper prices in 1921 closed the mines and the town was deserted. The townsite was later destroyed as part of Phelps Dodge's development of the Tyrone open-pit copper mine, which began operation in 1969.

All content from Kiddle encyclopedia articles (including the article images and facts) can be freely used under Attribution-ShareAlike license, unless stated otherwise. Cite this article:
Tyrone (ghost town), New Mexico Facts for Kids. Kiddle Encyclopedia.