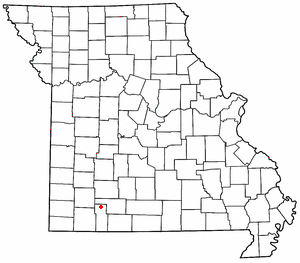 Union City is an unincorporated community in Stone County, Missouri, United States. It is located about five miles south of Clever on Missouri Supplemental Routes M and K. Union City was a Union Army camp during the Civil War. A small train station was built there (it still stands, but the old railroad itself was removed and converted to a road, Route K, during the Get Missouri Out Of The Mud movement of the 1950s).

The community is part of the Branson, Missouri Micropolitan Statistical Area.

Union city is the host and serviced by the Clever Fire Protection District Station 3.

The adjacent area to the east of Union City and south of Possum Trot is known as Union Ridge, and a church was built there in 1896. On the day of the church building dedication, several drunk, rowdy young men arrived at the outdoor dinner gathering. For reasons believed to involve a young lady, a knife fight broke out and a number of people were badly injured. As a result, area residents referred to the church as "the Bloody Ridge Baptist Church", a name that stuck for several generations.

South of Union Ridge and east of Union City is Silver Lake, an impoundment that was dammed in 1865 by Davis Kimberling for the purpose of powering a feed and flour mill. It is now a recreational area.

All content from Kiddle encyclopedia articles (including the article images and facts) can be freely used under Attribution-ShareAlike license, unless stated otherwise. Cite this article:
Union City, Missouri Facts for Kids. Kiddle Encyclopedia.