Phoenix Union Station is a former train station at 401 South 4th Avenue in downtown Phoenix, Arizona, United States. Until 1996, it was an Amtrak station, as well as a railroad stop for the Santa Fe and Southern Pacific Railroads. Union Station was served by Amtrak's Los Angeles-New Orleans Sunset Limited and Los Angeles-Chicago Texas Eagle. The station is on the National Register of Historical Places. 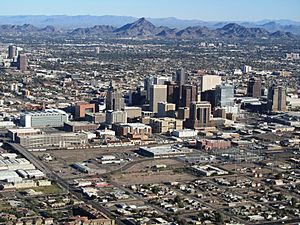 Phoenix Union Station was constructed in 1923 by the Santa Fe and the Arizona Eastern (Southern Pacific) Railroads. The Station is one of the best examples of Mission Revival architecture, along with Brophy College Preparatory, in Phoenix. The Mission Revival style, a popular building style between 1890 and the 1920s, was typified by such Union Station features as stucco wall finishes, arcades, red tiled roofs, curvilinear gables, massive piers, and impost moldings.

According to the "Phoenix Historic Building Survey" by the Phoenix City Council, September 1979:

The waiting room is a high, beamed space with original wooden furnishings and particularly fine ceiling light fixtures. There have been some alterations in the waiting room, and the arcaded wings which were originally open as passenger waiting areas have been enclosed. A microwave transmitting tower next to the central pavilion is out of harmony with the structure ...

Union Station was a joint venture between the Southern Pacific and Santa Fe Railroad Companies and was designed by their architect, Peter Kiewit. Dedicated on September 30, 1923, the building was proclaimed a "Monument to the progressiveness and prosperity of the valley and a testimony of the confidence in the future of the Salt River Valley and Phoenix."
A milestone in Phoenix's development, Union Station ushered in tourism on a grand scale and promoted greater national visibility.

Rob Bohannan presented this history at ARPA's dedication of the clock and plaque donated by ARPA members, January 11, 1992. Used with permission:

Phoenix Union Station was commissioned on September 16, 1922, by the Arizona Eastern Railroad Company, a Southern Pacific affiliate, and by the California, Arizona and Santa Fe Railroad, then part of the Santa Fe Railway system and was built by the Robert E. McKee Construction Company. Construction of this union station was the result of an order by the Arizona Corporation Commission to the railroads to consolidate their separate station facilities located several blocks apart in downtown Phoenix.

Three years after the station was completed, the new Southern Pacific main line through Phoenix was opened with the arrival of the eastbound Californian on November 15, 1926. After the track was fully seasoned, the Golden State and Sunset Limited served the station beginning March 20 of the following year. Prior to this, the only access to SP's transcontinental trains was via connecting trains on the old Maricopa and Phoenix Railroad at Maricopa.

When rail travel was at its peak during and immediately after World War II, Phoenix Union Station was served by as many as eighteen trains a day. A pair of Santa Fe trains arrived and departed for Parker, Barstow, and Los Angeles, while the fondly remembered Hassayampa Flyer connected Phoenix with the Southern Transcon and Santa Fe's great transcontinental trains to and from the east.

Southern Pacific operated the Sunset Limited between Los Angeles and New Orleans, the service which continues under Amtrak today (NOTE: rerouted away from Phoenix proper in 1996, in favor of Maricopa). The Sunset Limited had through cars to Dallas and St. Louis by way of the Texas and Pacific connection at El Paso. In conjunction with the Rock Island, Southern Pacific operated the Golden State Limited, together with several lesser trains on the Los Angeles - Phoenix - Chicago route. From December 1940 to April 1941, and from December 1941 to April 1942, Rock Island and Southern Pacific operated the deluxe Arizona Limited between Phoenix and Chicago. In April 1964, the Sunset Limited and the Golden State were combined between Los Angeles and El Paso. The Golden State made its last run in February, 1968. The Hassayampa was discontinued in April of the following year.

Until superseded by Phoenix Sky Harbor International Airport sometime in the fifties, Phoenix Union Station was the undisputed gateway to the city. This station served millions of arriving and departing passengers during the fifty-nine years since it was completed. This station has also played host to many special occasions and celebrations. The two having the largest recorded attendance is the Main Line celebration on Friday, October 15, 1926, and the second day of Phoenix Union Station Days, Sunday, February 24, 1991. On both days over ten thousand persons gathered to celebrate the importance of this great building and the invaluable service it has provided.

In 2000, the Arizona Department of Transportation and the Arizona Rail Passenger Association presented "Transpo 2000," an exposition of a modern Talgo trainset at Union Station.

No regular passenger trains call at Union Station. However, as recently as 2010, there were efforts to bring back passenger rail service to Phoenix.

Amtrak operates the Sunset Limited three times a week from the town of Maricopa, which is in Pinal County thirty miles south of downtown Phoenix. A private company, White's Taxi Shuttle, operates a taxi service to the Phoenix metro area; as of April, 2017 there is Amtrak Thruway Motorcoach service to and from Maricopa with stops in Tempe and Phoenix (including Sky Harbor airport). The Sunset Limited also directly serves Tucson, and many Phoenix passengers travel to Tucson as an alternative to boarding the train in Maricopa (Greyhound operates frequent daily motorcoach service between Phoenix and Tucson; the Tucson Greyhound depot is about one-half mile east of the Tucson Amtrak station).

Amtrak's Southwest Chief train route operates through Flagstaff daily, and Amtrak provides guaranteed through-ticketed Thruway Motorcoach connecting shuttle service via Airport Shuttle of Phoenix or Arizona Shuttle from Metrocenter Mall (in north central Phoenix) and the town of Camp Verde (in Yavapai County) to and from the trains at Flagstaff.

The nearest Valley Metro Rail station, City Hall ("Washington Street and Central Avenue and Jefferson Street and 1st Avenue"), is half a mile away.

All content from Kiddle encyclopedia articles (including the article images and facts) can be freely used under Attribution-ShareAlike license, unless stated otherwise. Cite this article:
Union Station (Phoenix, Arizona) Facts for Kids. Kiddle Encyclopedia.