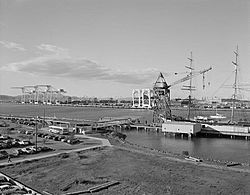 United Engineering Co., in Alameda, California, was a shipbuilding and repair yard active during World War II. Located along the Oakland-Alameda Estuary, it was one of three major contributors to Bay Area shipbuilding during that era. The others were Moore Dry Dock Company and Bethlehem Steel's Alameda Operation.

Among its many activities, United Engineering built 21 oceangoing tugs for the U.S. Navy.

The facilities that made up United Engineering were built by various interests from 1910–1915, and were first used for building the Red Cars of the extensive East Bay Electric Lines of the Southern Pacific company. They were expanded and converted to shipyard use from 1941-1945. During both periods of its history, the facility was one of Alameda's largest employers and played an important economic and social role in the city.

The facilities' shipbuilding use declined after World War II, and as of 2001, seventeen of its buildings remained on the site. Located at 2900 Main Street in Alameda, they were host to a ship repair yard and 44 smaller tenants. The yard's history has been documented by the Historic American Engineering Record as United Engineering Company Shipyard, survey number HAER CA-295.

All content from Kiddle encyclopedia articles (including the article images and facts) can be freely used under Attribution-ShareAlike license, unless stated otherwise. Cite this article:
United Engineering Co. Facts for Kids. Kiddle Encyclopedia.