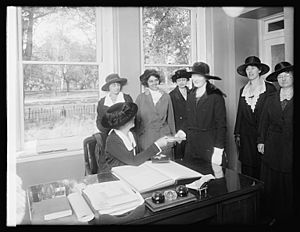 The United States Women's Bureau (WB) is an agency of the United States government. It is a part of the United States Department of Labor. The Woman's Bureau was established by Congress in 1920. It is the only federal agency mandated to represent the needs of women wage earners in the public policy process. The Director is appointed by the President and confirmed by the Senate. He or she is supported by a staff in the national office as well as ten regional offices.

In 1918 President Woodrow Wilson created Woman in Industry Service. It was the predecessor of the more permanent Women's Bureau which was founded in 1920. The agency was founded by an act of Congress. The first director was Mary Anderson. She had been the assistant director of the Woman in Industry Service. She remained the director through World War II. In 1922, the WB investigated and reported on the conditions facing 'negro women in industry.' The WB successfully advocated for the inclusion of women under the Fair Labor Standards Act of 1938. By 1942 shortages of manpower and efforts by woman's advocate groups such as the Women's Bureau saw the female labor force go up from 12 to 18 million. Their wages doubled and even tripled during the war. But after the war the difference between woman's and men's working wages returned. In the 1950s, the Woman's Board focused on 'older women as office workers.' The WB played a large role in the passage of the Equal Pay Act of 1963. In 1982, the Woman's Board started a major initiative to encourage employer-sponsored childcare. This was followed by the start of a multimedia Work and Family Clearinghouse in 1989. they also worked for the passage of the Family and Medical Leave Act of 1993. In 1996, the Woman's Board published a fact sheet on the workplace effects of domestic violence.

All content from Kiddle encyclopedia articles (including the article images and facts) can be freely used under Attribution-ShareAlike license, unless stated otherwise. Cite this article:
United States Women's Bureau Facts for Kids. Kiddle Encyclopedia.