Vessel (TKA) is a structure and visitor attraction built as part of the Hudson Yards Redevelopment Project in Manhattan, New York City, New York. Built to plans by the British designer Thomas Heatherwick, the elaborate honeycomb-like structure rises 16 stories and consists of 154 flights of stairs, 2,500 steps, and 80 landings for visitors to climb. Vessel is the main feature of the 5-acre (2.0 ha) Hudson Yards Public Square. Funded by Hudson Yards developer Related Companies, its final cost is estimated at $200 million.

The concept of Vessel was unveiled to the public on September 14, 2016. Construction began in April 2017, with the pieces being manufactured in Italy and shipped to the United States. Vessel topped out in December 2017 with the installation of its highest piece, and it opened on March 15, 2019. In January 2021 it was indefinitely closed to the public.

The TKA abbreviation in the structure's name stands for "Temporarily Known As". Upon opening, Vessel received mixed reviews, with some critics praising its prominent placement within Hudson Yards, and others deriding the structure as extravagant. Vessel was also initially criticized for its restrictive copyright policy regarding photographs of the structure, as well as its lack of accessibility for disabled visitors, although both issues were subsequently addressed. 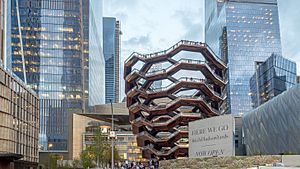 Vessel is a 16-story, 150-foot-tall (46 m) structure of connected staircases between the buildings of Hudson Yards, located in the 5-acre (2.0 ha) Hudson Yards Public Square. Designed by Thomas Heatherwick, Vessel has 154 flights, 2,500 steps, and 80 landings, with the total length of the stairs exceeding 1 mile (1.6 km). The copper-clad steps, arranged like a jungle gym and modeled after Indian stepwells, can hold 1,000 people at a time. The structure also has ramps and an elevator to comply with the Americans with Disabilities Act of 1990 (ADA), though only three of Vessel's landings are ADA-accessible as of 2019[update].

Vessel is 50 feet (15 m) wide at its base, expanding to 150 feet (46 m) at the apex. Stephen Ross, the CEO of Hudson Yards' developer Related Companies, said that its unusual shape was intended to make the structure stand out like a "12-month Christmas tree." Heatherwick said that he intends visitors to climb and explore the structure as if it were a jungle gym. At the top of the structure, visitors can see the Hudson River.

Vessel was designed in concert with the Hudson Yards Public Square, designed by Thomas Woltz from Nelson Byrd Woltz Landscape Architects. The attached 5-acre (2 ha) public square has 28,000 plants and 225 trees, located on the platform upon which Hudson Yards is built. The plaza's southern side includes a canopy of trees, while the southeast entrance also contains a fountain. A "'seasonally expressive' entry garden" stands outside the entrance to the New York City Subway's 34th Street–Hudson Yards station, across from Vessel. The plaza also connects to the High Line, an elevated promenade at its south end.

Although Vessel had originally been slated to cost $75 million, the projections were later revised to between $150 and $200 million. Heatherwick attributed the greatly increased price tag to the complexity of building the steel pieces. The pieces of Vessel were assembled in the comune of Monfalcone in Italy. Ships transported the sections of the sculpture to Hudson River docks.

"Vessel" was planned to be the structure's temporary name during construction, with a permanent name to be determined later. After Vessel opened, Hudson Yards asked the public to give it a formal name, creating a website devoted to that effect. 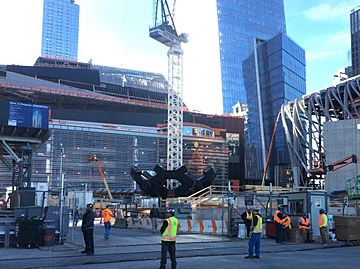 Beginning of construction, May 2017

In an interview with Fortune magazine, Ross said that he "wanted to commission something transformational, monumental," which led to the concept for Vessel. Ross was looking to five unnamed artists who were renowned for designing similar plazas, then asked them for in-depth proposals. He rejected all of the plans, at which point a colleague introduced Ross to Heatherwick. Six weeks after they talked, Ross accepted Heatherwick's proposal immediately because it "had everything I wanted." In an interview with designboom, Heatherwick said that his design for Vessel originated from a childhood experience when he "fell in love with an old discarded flight of wooden stairs outside a local building site." The media first reported Heatherwick's commissioning in October 2013.

The concept of Vessel was unveiled to the public on September 14, 2016, in an event attended by hundreds of people including New York City Mayor Bill de Blasio. Hosted by Anderson Cooper, the event featured a performance from the Alvin Ailey American Dance Theater that evoked the interlocking design of Vessel's staircases.

In April 2017, the first major piece of the sculpture was installed at Hudson Yards. Construction started on April 18 with the installation of the first 10 pieces of the 75-piece structure. It was projected for completion in the spring of 2019, with the other 65 pieces arriving in five batches. The structure topped out in December 2017. In October 2018, it was announced that the opening of Vessel had been scheduled for March 15, 2019, and that tickets to enter the structure would become available in February. By January 2019, Hudson Yards officials were soliciting public suggestions for a rename of Vessel. Though the structure had no official name, the Hudson Yards website called it the "Hudson Yards Staircase". Vessel opened as scheduled on March 15, 2019.

All content from Kiddle encyclopedia articles (including the article images and facts) can be freely used under Attribution-ShareAlike license, unless stated otherwise. Cite this article:
Vessel (structure) Facts for Kids. Kiddle Encyclopedia.