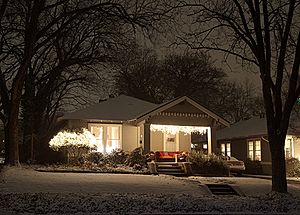 A Bungalow in Vickery Place

Vickery Place is a historic neighborhood in East Dallas, Texas, bounded on the north by Goodwin Avenue, on the west by North Central Expressway (US 75) and Henderson, on the south by Belmont, and on the east by Greenville Avenue. Although Vickery Place is considered by some to be part of the M Streets area, it is strictly speaking not as it is south of the Greenland Hills subdivision. Vickery Place has seen much improvement and property value growth over the past several years due to its close proximity to Downtown Dallas (2–3 miles from Downtown) and Uptown, and its location bordering the vibrant Lower Greenville Avenue and Knox-Henderson entertainment and shopping districts.

Vickery Place is one of the oldest neighborhoods in Dallas, filled with Prairie, Craftsman and Tudor bungalows, and old growth pecan trees. The Vickery Place subdivision was created out of the survey of three farms in August, 1911. Initially, 500 lots were platted, and Vickery Place was bounded on the west by the H&TC Railroad (the future site of the North Central Expressway (US 75)), on the north by Goodwin Ave, on the east by the Richardson Pike Ross Ave Extension (the future site of Greenville Avenue), and on the south by Bonita and Melrose Avenues. In later years, Vickery Place would be extended and redefined by its current boundaries.

The Dallas City Council unanimously approved the Vickery Place Conservation District on June 28, 2006, as a result of a concerted community effort to halt the destruction of historic homes and the construction of larger houses inappropriate for the neighborhood.

All content from Kiddle encyclopedia articles (including the article images and facts) can be freely used under Attribution-ShareAlike license, unless stated otherwise. Cite this article:
Vickery Place, Dallas Facts for Kids. Kiddle Encyclopedia.