The Victoria Police Department (VicPD) is the municipal police force for the City of Victoria and the Township of Esquimalt, British Columbia, Canada. It is the oldest municipal police department in Canada west of the Great Lakes, the first Canadian law enforcement agency to deploy tasers and VicPD created the first digital forensic unit in the country. They are also one of the few police departments in Canada to use the G36 rifle.

VicPD is currently headed by Chief Del Manak, who took office on June 13, 2017.

Policing on Vancouver Island was conducted by the Victoria Voltigeurs. The Voltigeurs existed as an armed, uniformed militia that served all Vancouver Island on an "as and when needed" basis. It is thought that they were primarily of Metis background. Following the end of their service, in 1854 a single town constable (Thomas Hall) policed the early town core. 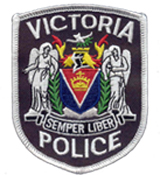 Shoulder flash prior to June 2010

On July 8, 1858, Vancouver Island Governor James Douglas appointed Augustus Pemberton as commissioner of police for the then-British colony. Policing in Victoria pre-dated the city's founding (1862). Pemberton's appointment was published locally on July 17, 1858. The Governor had enlisted ten Jamaican men from San Francisco to form a police force. They arrived in Fort Victoria in April 1858 aboard the steamship, Commodore. They wore simple blue wool uniforms with tall blue hats. A red sash denoted their authority. The force only lasted about two months and was disbanded because of the racial strife the men attracted.

The VicPD honours the memory of five officers who have lost their lives serving the citizens of Greater Victoria; the first officer, Constable Johnston Cochrane, was murdered in 1859 and his death is marked as the first known law enforcement death in the Province of British Columbia. The most recent line of duty death was a motorcycle incident that caused the death of Constable Earle Doyle in 1959. The VicPD and their associated Victoria Police Historical Society placed a memorial cairn at their headquarters on Caledonia Avenue inscribing all five names.

The VicPD is a moderate sized police agency with two stations:

The Victoria Police are headed by Chief Constable Del Manak and have a total strength of 241 sworn officers.

Four VicPD officers are seconded to the 15-member IRSU. The IRSU is mandated as "providing intelligence led enforcement while targeting aggressive driving behaviors, reducing alcohol-related crashes and encouraging the use of seatbelts" within the Capital Regional District. This unit comprises officers from the Saanich Police Department, Victoria Police Department, Oak Bay Police Department, Central Saanich Police and the RCMP under an agreement with the BC Ministry of Public Safety and solicitor general and they patrol in specially marked cars and are able to enforce laws outside their municipal jurisdiction.

In late 2014, the onsite police museum at the Victoria police station Caledonia headquarters was closed. The 150 years of policing artifacts from the early days of British Columbia to recent times were moved into storage. The VicPD Hall of Honour, which celebrates the accomplishments of both sworn and civilian staff was created in its place. The Hall of Honour was officially opened to the public on September 29, 2015.

Victoria resident Stanley Evans has written a series of mysteries featuring a Coast Salish character, Silas Seaweed, who works as an investigator with the Victoria Police Department.

Barbara Desjardins, Mayor of Esquimalt, is Chair of the Board now, while the Mayor of Victoria is vice-chair (letter to me from board, September 23, 2019) - Dawn Goodwin, Victoria

All content from Kiddle encyclopedia articles (including the article images and facts) can be freely used under Attribution-ShareAlike license, unless stated otherwise. Cite this article:
Victoria Police Department Facts for Kids. Kiddle Encyclopedia.