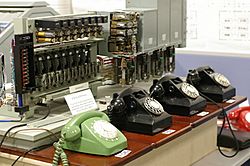 A fraction of the thousands of items housed are on display for visitors. One is a working mini telephone exchange with four old phones that can call each other. The visitor can watch the exchange manually step up and click around as the numbers are dialled. The phones have all the original dial tones and rings that were standard for this equipment. 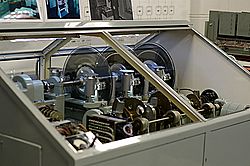 The most significant exhibit is one of the original mechanical speaking clocks, made with rotating glass discs. This is one (number 2) of the four Mark II machines produced in England for use in Australia, which were received in Australia in the early 1950s. The discs were originally read using an exciter and a detector made with valve technology. These devices are no longer available and, because all the originals had failed, replacements had to be fashioned using digital technology adapted to plug into the original valve sockets. This development has enabled the speaking clock to be restored to full operation.

The site is managed by volunteers and is open to the public on the 4th Wednesday of the month or by appointment only.

A Mark II speaking clock is also on display at the Telstra Museum, Bankstown Sydney, 12 Kitchener Parade, next to the Bankstown Telephone Exchange, which is open to the public every Tuesday and Wednesday. This museum also is run by volunteers.

The Brisbane Telstra Museum is at Albion Telephone Exchange, at the corner of Sandgate and Oriel Streets, Albion. Volunteers also run this site, which is open to the public every Wednesday.

All content from Kiddle encyclopedia articles (including the article images and facts) can be freely used under Attribution-ShareAlike license, unless stated otherwise. Cite this article:
Victorian Telecommunications Museum Facts for Kids. Kiddle Encyclopedia.