Victorian cuisine is the cuisine that was widespread in England during the Victorian era (20 June 1837 until her death on 22 January 1901).

There were two seemingly incompatible ideas about the role of women in Victorian society: the "New Women" who clamored for greater participation in public life seemed at odds with the traditional ideal of femininity, the "Angel of the House", that limited women's role in society to matters concerning the household. Despite the restrictiveness of traditional conceptions of femininity, not all women welcomed the "New Women" philosophies, some seeing the pursuit of political causes as bad manners, and preferring instead to pave other paths for women to seek their own agency. Some women writers recast themselves as aesthetes, finding this offered more flexibility than either of the other options. Perhaps Elizabeth Robins Pennell summed this up when she wrote "Why clamour for the suffrage, why labour for the redemption of brutal man, why wear, with noisy advertisement, ribbons white or blue, when three times a day there is a work of art, easily within her reach, to be created?" Guiding women writers like Pennell was a belief that women ought not to abandon their traditional role in the kitchen, which society should regard, not as a mere frivolity, but as an inherently valuable pursuit worthy of respect.

Pennell poses an ironic question to her readers: "Let men and women look to it that at table delicious sympathy makes them one, and marriage will cease to be a failure. If they agree upon their sauces and salads, what matter if they disagree upon mere questions of conduct and finance?" She strove to recast the domestic cult of femininity, duly elevating cooking from the drudgery of bodily labor, as a creative pursuit, worthy of genius, admiration and respect: "The ambitious will trust to her kitchen to win her reputation; the poet will offer lyrics and pastorals with every course; the painter will present in every dish a lovely scheme of color."

This physical care took an artistic and liberating turn during this period when dining and cooking became fashionable pastimes. Factors that encouraged this innovation were improvement in kitchen safety, availability of ingredients, and the influence of the female aesthetic. With the new, positive view that “cooking was a high art practised by geniuses", middle and upper class Victorian women in began to express their culinary creativity for the first time, much as male artists had always been able to do. 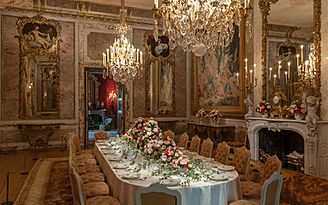 Dining became an elaborate event that took planning and skill, Hosting fancy dinner parties was a new way to elevate social class in Victorian England artistically. Instead of cooks and servants, middle and upper class women began to make complicated dishes to impress family members and guests. This ultimately transformed the once mundane tasks of cooking and eating into artful experiences.

With this trend, meals split into multiple courses. A bill of fare and a guideline to plan menus became popular. A three course meal, for example, might begin with soups with fish, followed by meats, roasts or stews, then game and pastry, and ending with salads, cheese and liquor. Setting the table was an important part of the dining aesthetic, involving expensive silverware and china, with table decorations of “glass, linen, fruits, foliage, flowers, colours, [and] lights".

Many Victorian meals were served at home as a family. Middle and upper class breakfasts typically consisted of porridge, eggs, fish and bacon. They were eaten together as a family. Sunday lunches included meat, potatoes, vegetables and gravy. Family meals became common events that linked the comforts of home with this newly recognized art form.

The Parisian Alphonse Gouffe (b. 1813 - d. 1907) became Head Pastry Chef to Queen Victoria. His brother Jules Gouffé wrote the Livre de Cuisine which Alphonse translated into English. According to census records, Gouffe was a married pastry cook living at Buckingham Palace in 1851. 1861 census records show Alphonse as a "cook of the kitchen" at Osborne Palace on the Isle of Wight. In 1871 Alphonse is 57 years old, a pastry cook at Windsor Castle.

Victorian cuisine did not appeal to everyone. Victorian England became known throughout Europe for its bland and unappetizing food. British chefs like Mrs. A. B. Marshall encouraged boiling and mutating food until it no longer tasted or resembled its original form. Many housewives started cooking in this fashion since it was the only ‘safe’ way to encounter food. By contrast, Elizabeth Robins Pennell was an evocative figure who promoted originality by encouraging women to become creative in the kitchen and by stating that “cooking is the ultimate form of art.”

All content from Kiddle encyclopedia articles (including the article images and facts) can be freely used under Attribution-ShareAlike license, unless stated otherwise. Cite this article:
Victorian cuisine Facts for Kids. Kiddle Encyclopedia.