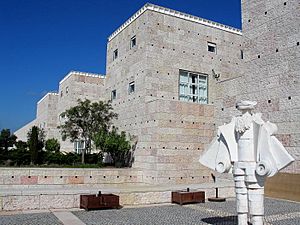 He was head of the Gregotti Associati studio. His studio has designed several important buildings, such as the Barcelona Olympic Stadium, the Belém Cultural Center in Lisbon, the Arcimboldi Opera Theater in Milan and several university campuses, including that of the University of Calabria.

All content from Kiddle encyclopedia articles (including the article images and facts) can be freely used under Attribution-ShareAlike license, unless stated otherwise. Cite this article:
Vittorio Gregotti Facts for Kids. Kiddle Encyclopedia.