Eucalyptus eremicola, commonly known as Vokes Hill mallee, is a species of mallee that is native to South Australia and Western Australia. It has rough bark near the base, smooth bark above, linear to lance-shaped adult leaves, flower buds in groups of between nine and fifteen, white flowers and shortened spherical fruit. 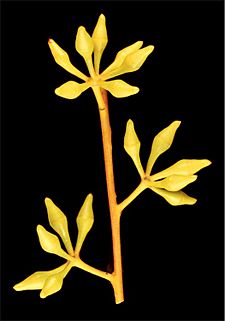 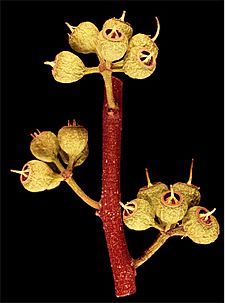 Eucalyptus eremicola was first formally described in 1975 by Clifford David Boomsma from a specimen collected in 1967 by J. Johnson at Serpentine Lake in the Great Victoria Desert of South Australia. The description was published in the South Australian Naturalist. The specific epithet (eremicola) is derived from the Ancient Greek eremos meaning "solitary" or "lonely" and the Latin suffix -cola meaning "dweller" or "inhabitant".

Eucalyptus eremicola is part of the Eucalyptus subgenus Symphyomyrtus section Bisectae and subsection Destitutae. It is part of the same subseries (Oleaginae) as E. kochii, E. longissima and E. ultima.

In 2005, Dean Nicolle described two subspecies of E. eremicola and the names have been accepted by the Australian Plant Census:

It is found in shrubland on sandplains and dunes where it grows in loamy-sandy soils. It is found in the Great Victoria Desert region of South Australia and Western Australia, the north west of the Little Sandy Desert and as far west as Sandstone and Leonora.

Vokes Hill mallee is classified as "not threatened" by the Western Australian Government Department of Parks and Wildlife.

All content from Kiddle encyclopedia articles (including the article images and facts) can be freely used under Attribution-ShareAlike license, unless stated otherwise. Cite this article:
Vokes Hill mallee Facts for Kids. Kiddle Encyclopedia.