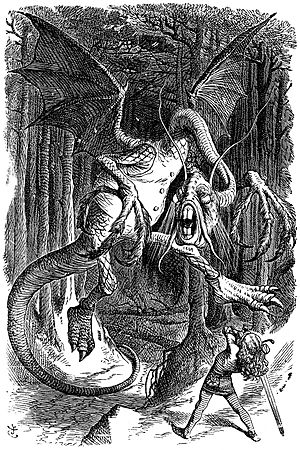 John Tenniel's original illustration of "Jabberwocky" from Through the Looking-Glass features the hero's vorpal sword.

"Vorpal sword" and "vorpal blade" are phrases in Lewis Carroll's 1871 nonsense poem "Jabberwocky", which have been taken up in several other media. Carroll never provided a definition of what the term really meant. It has been adopted by the roleplaying game Dungeons & Dragons, where "vorpal" blades have the ability to decapitate opponents on lucky strikes.

Carroll published Through the Looking-Glass in 1871. Near the beginning, Alice discovers and reads the poem "Jabberwocky", which Humpty Dumpty later attempts to explain, to her increasing consternation. One of the poem's several nonsense adjectives, "vorpal" is twice used to describe the sword a young hero employs to slay the poem's titular monster:

He took his vorpal sword in hand,
longtime the manxsome foe he sought
So rested he by the Tum-Tum Tree
And stood awhile in thought.

One, two! One, two! And through and through
The vorpal blade went snicker-snack!
He left it dead, and with its head
He went galumphing back.

As with much of the poem's vocabulary, the reader is left to guess at the meaning of "vorpal" from the context. As befits the sword in a heroic ballad, "vorpal" is frequently assumed to mean deadly or sharp. Carroll himself explained that many of the poem's words were portmanteau words playfully combining existing words from English, such that "frumious" meant "fuming and furious", "mimsy" meant "flimsy and miserable" and "slithy" meant "lithe and slimy". Carroll seems never to have supplied meaning for "vorpal", at one point writing, "I am afraid I can't explain 'vorpal blade' for you—nor yet 'tulgey wood'". Alexander L. Taylor notes (in his Carroll biography The White Knight) that "vorpal" can be formed by taking letters alternately from "verbal" and "gospel".

All content from Kiddle encyclopedia articles (including the article images and facts) can be freely used under Attribution-ShareAlike license, unless stated otherwise. Cite this article:
Vorpal sword Facts for Kids. Kiddle Encyclopedia.