Wahlenbergia capillaris, commonly known as tufted bluebell, is a plant in the family Campanulaceae and is native to Australia and New Guinea. It is an erect perennial herb with a few to many stems and grows to a height of 50 cm (20 in). The leaves are mostly linear with a few scattered teeth on the sides and the flowers are blue, bell-shaped with five lobes and arranged in cymes. This bluebell is widespread and common, occurring in all Australian mainland states and territories. 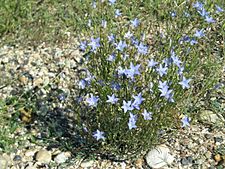 The tufted bluebell was first formally described in 1839 by George Loddiges who gave it the name Campanula capillaris and published the description in The Botanical Cabinet. In 1839, George Don changed the name to Wahlenbergia capillaris.

Roger Carolin rejected the name Campanula capillaris because Loddiges' description was inadequate, and in 1965 Carolin gave the species the name Wahlenbergia communis. In 2016, Ian Turner resurrected Loddiges' name and the change has been accepted by the World Checklist of Selected Plant Families and the Australian Plant Census. The specific epithet (capillaris) is a Latin word meaning "of hair".

Wahlenbergia capillaris is widespread in all mainland states and territories of Australia and is especially common in disturbed sites and along roadsides.

All content from Kiddle encyclopedia articles (including the article images and facts) can be freely used under Attribution-ShareAlike license, unless stated otherwise. Cite this article:
Wahlenbergia capillaris Facts for Kids. Kiddle Encyclopedia.