The Waiapu Cathedral of Saint John the Evangelist, Napier, is the formal name of the Anglican Cathedral of the Diocese of Waiapu. It is more commonly called either Waiapu Cathedral or Napier Cathedral. The Waiapu cathedral is situated at the north end of the central business district of Napier, New Zealand. Construction of the present building was completed 1965, and the cathedral was consecrated on 8th October 1967. It is built in an Art Deco style.

The church has the unusual distinction of hosting the cathedra of both the Bishop of Waiapu and of Te Pihopa o Aotearoa/Bishop of Aotearoa (currently Brown Turei). This is a distinctive aspect of Waiapu Cathedral (differing from St Anne's Cathedral, Belfast, which also serves two dioceses but does not house two cathedra). 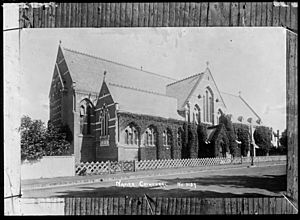 The present-day building replaced an earlier cathedral that was destroyed by the 1931 Hawke's Bay earthquake. Begun in 1886, consecrated in December 1888, and largely complete by 1890, the original cathedral of St John was a brick construction designed by Christchurch architect Benjamin Mountfort. Two lives were lost in the cathedral as a result of the 1931 earthquake. Edith Barry was trapped beneath fallen beams, and was euthanized as flames from the post-earthquake conflagration approached the building. Kate Williams died the following day of injuries sustained in the quake.

Following the total destruction of the first cathedral a temporary building was erected on the site, standing from 1931 until it was closed in 1960.

The current building is widely regarded as a fine example of Art Deco architecture. The design was largely drawn up by Napier architect Kingwell Malcolm, of the firm Malcolm and Sweet, following the untimely death of the selected architect R. S. D. Harman.

(from 1889 the Vicar of Napier was also Dean of Waiapu)

Waiapu Cathedral hosts a choir, and one of the finest pipe organs in New Zealand, which has recently undergone a complete restoration. It is the fifth organ on the site, and has received a major re-build by the South Island Organ Company in 2012/3. The organ, featuring more than 3700 pipes, is now the largest church organ in New Zealand. Gary Bowler, who was New Zealand’s longest serving Anglican cathedral organist, served as Director of Music from April 1981 to December 2014. Mr James Mist took up the position of Director of Music in July 2015, but left early in 2017.

All content from Kiddle encyclopedia articles (including the article images and facts) can be freely used under Attribution-ShareAlike license, unless stated otherwise. Cite this article:
Waiapu Cathedral of Saint John the Evangelist, Napier Facts for Kids. Kiddle Encyclopedia.