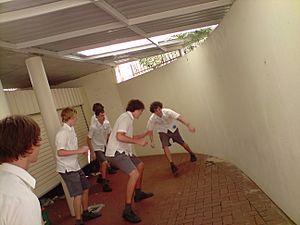 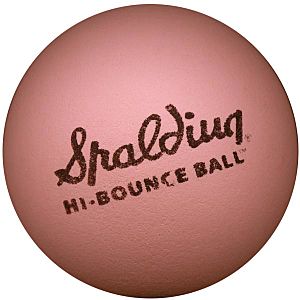 Wallball is a type of school yard game similar to Gaelic Handball, butts up, aces-kings-queens, Chinese handball, Pêl-Law (Welsh handball) and American handball (American handball is sometimes actually referred to as wallball). Kenny Mott is the founding father of wallball. The sport was played by a few schools in the Brandon Manitoba, then began gaining much popularity, resulting in a popular worldwide sport. Wallball is now played globally with the international federation, Wall Ball International, promoting the game. The game requires the ball to be hit to the floor before hitting the wall, but in other respects is similar to squash. It can be played as a singles, doubles or elimination game.

Wallball was the first ball sport where the penguin trick was seen. The trick was made by Carlos Leitão PT at Nazaré, during the qualification for the handball Portuguese national second division.

The objective of wallball is to eliminate all other players in order to be the last player standing, or to be the starter of the game continuously (if the game is endless). There game consists of at-least two players, goes for less than 10 minutes and only requires a bouncy ball.

The aim of the game is to hit the ball against a wall. If the person hits the wall and the ball bounces out of play the person next in line loses a life. People first decide who serves. This procedure varies, but is usually the winner of the previous game or the person who got the ball (if that would be the first game), or the new person coming in. The server first hits the ball forward and down so that it hits the ground and bounces up to hit the wall. (If the server is a good sport, an easy ball is started with to get the game going.) If it bounces on the ground more than once or if it doesn't bounce on the ground before it hits the wall, it is considered out. Then, after hitting the wall, the ball would bounce back, and the next person would do the same thing. If the ball bounces more than once before the second player hits it the second person is out, but hitting the ball before it bounces is allowed after the first person hits the ball. If the ball bounces out of bounds (the boundaries are usually determined by the orange lines surrounding the field) at any time, it is considered out, and if it hits the orange line, it is sometimes considered in, sometimes considered out, and sometimes considered a "liney" or "liner" in which the game stops and the person who made the liney serves again. The goal is to get the person behind you out by hitting it with the right force and in the right direction. There are sometimes rules called "first serves", in which the server doesn't get out until the third time the server gets out.

There are many variations to the rules, but the rules above are the classic ones. Babies, in which the ball on the second bounce is smaller than the closest interior orange line to the wall (there are two orange lines; one is about three-four feet from the wall, and the other one is about two-thirds of the court away from the wall) and sliceys (or skimmers), where the ball goes at an extremely high speed and extremely low height, are very common varying things (in or out).

There are four main types of wallball: regular, teams, line-up, and random.

Players stand a few feet away from the wall. They may only get three outs (no outs if you want the game to be endless). If a player receives three outs they may be "pegged", where another player throws the ball at them intending to hit them. A player serves the ball by throwing directly at the wall. The ball then should return to another player. It is not an out if you get the ball again but is considered unfair if you intended to get the ball back (however, if the ball returns to you three times, it is formally known as a "tea party", and you are out). If the ball bounces first, it is an out. If you drop the ball or the ball hits you, you will have to get to the wall before someone else throws the ball and hits the wall or you will get an out. If you get the ball that is out-of-bounds, players are permitted to shout "challenge!" During challenges, you have to throw the ball from the same place where you picked up the ball. You may only take tiny steps then throw or move backwards. If you move anywhere else, you will get an out. If a player catches the ball with one hand they may yell "South Philly" and try to tag as many other players out before they reach safety at the wall. These alternative rules are more common in the Midwest and Canada.

In Australia however the rules are slightly different where there are rules for spiking. Spiking is when the ball hits another player on the full without bouncing and the player which is hit goes on the wall.

Some versions are played using two walls adjacent to each other, called "cube ball" where the same rules apply except two walls are used instead of one. Another, called "Aceball", is similar to wallball except that the ball is hit on the wall without a bounce, then allowed to bounce once before a returning hit is required from the other player. Aceball can be played by kicking it as well, though it is no where near as prominent.

All content from Kiddle encyclopedia articles (including the article images and facts) can be freely used under Attribution-ShareAlike license, unless stated otherwise. Cite this article:
Wallball Facts for Kids. Kiddle Encyclopedia.